The number of active lines is allowed to vary at your discretion. On each of them is accepted from one cent to two euros. As you can count, up to fifty euros per round is accepted. The goal is to get paid. In the usual way they are awarded on combinations of basic pictures. They should line up in a row on the line, starting with the first drum on the left. Each sequence on one lane gives a gain only on the highest chain that is part of it.

The payment is calculated on the line bet. It is multiplied by the combination factor, which in Volcano Eruption ranges from x3 to x500. If there are several combinations (in different bands), the winnings are added together. Then all the money can be picked up or put on the line in a risk game. The gambling minigames is launched in a separate window. In it you can guess the color or the suit of a closed card. If you manage to correctly name the color, the payout will double. If you guess the suit, the amount will increase fourfold. There is no right to error. You can play in one approach up to five times in a row. 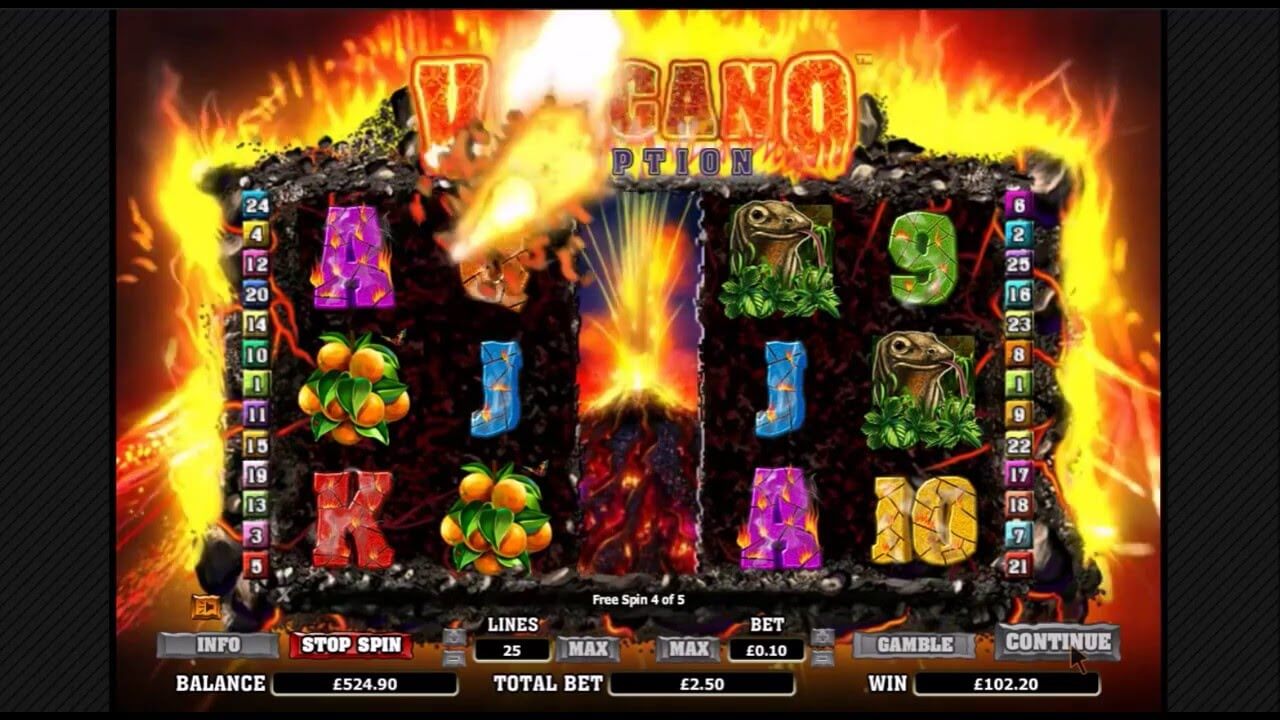 Tropical animals and fruits are drawn on the reels of the Volcano Eruption slot machine, as well as playing card ratings from nine to ace, made of frozen lava, through the cracks of which the flames make their way. The slot also uses a special Wild symbol (erupting volcano), which also performs the functions of Scatter. It appears on the three middle reels, does not depend on the active lines and is paid at the total rate. In addition, it starts a round of repeated spins, when three scatters are in any position on the screen. There will be five rotations. The rate in them will remain the same. Putting it for you will be a casino. In them, the third drum will be fully occupied by the Wild symbol. It will also erupt, turning other images into similar ones. The formation of combinations and the calculation of payments will be made with their account. Free spins are not extended.

Read tips on the game in the line located between the reels and the control panel. User settings are only two: mute and select the size of the screen. All features of the gameplay are discussed in the paytable. It discusses the general rules, the possibility of special symbols, prize spins, the game of chances and the location of active lines on the reels.