Sparks is a model with five reels and twenty constantly engaged lines. On its screen, the characters are arranged in three rows (a total of fifteen pictures). Bets on all bands are necessarily equal. For each position up to ten coins are accepted in denominations from one cent to two USD. Thus, the client can put on a round of not less than twenty cents and not more than four hundred USD. 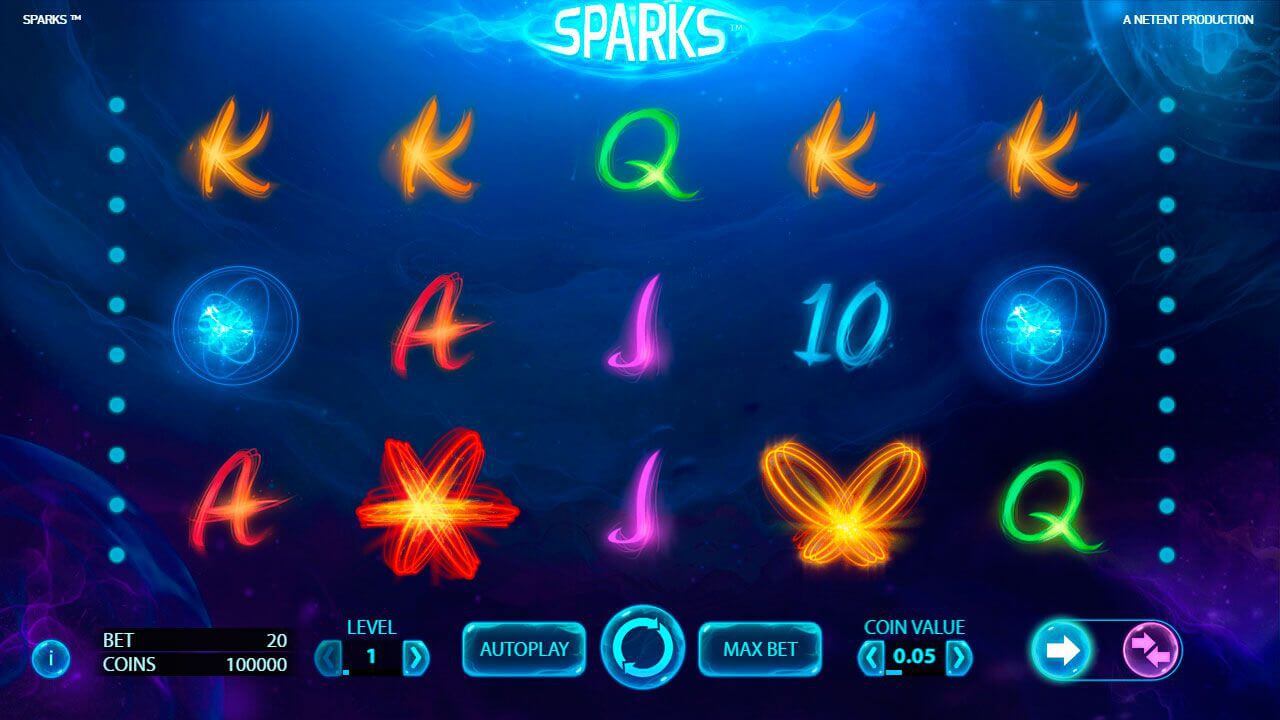 In addition to standard images, Sparks has special characters with unusual features, two different combinations of education systems and other gameplay options. The client, pressing one of the two special buttons on the panel, decides how winning chains will be formed: only from right to left, starting from the first reel, or from two edges of the screen. In any case, the payoff is charged from the individual active strip only for the longest option.

For the formation of a paid sequence requires three, four or five identical pictures. The amount of winnings depends on the coefficient specified in the table, which is from x5 to x200. It multiplies by line bet. If there are several chains in one round, all the money added by them is added up and immediately after the reels stop, they are credited to the account.

On the reels of the video slot, you can see patterns and shapes drawn with colored lights. Even the denominations of playing cards from ten to ace are depicted in a similar style. They may appear in stacks occupying the whole column. So sometimes the whole screen can be filled with the same pictures. Wild and Expanding Cloning Wild symbols are endowed with special features. Consider their functions:

A new spin starts with a round button in the center. To choose the bet amount you need, specify the number and face value of the coins that you will be betting on. There is a separate button to activate the maximum rate. On the right are two small round buttons. The one with one arrow only activates the mode of forming combinations from left to right. The button with two arrows includes the formation of chains on both sides. The information panel is located at the bottom. It also contains a question mark, which opens a reference section and a key image that launches the parameters dialog box. In the settings you can activate fast spin, turn off the screensaver.

The model attracts with the possibility of choosing one of two modes of formation of combinations and very advantageous features of the Expanding Cloning Wild symbol. Low payroll ratios are offset by a large number of payouts.