This cool free slot machine will amaze you with a variety of features, quality graphics and fun process. Even if you are absolutely indifferent to everything connected with military actions, do not leave without attention the video slot Silent Run.

Silent Run is a five-reel video slot with twenty-five fixed lines and three rows of characters on the screen. You can play the slot machine by betting on a line of one to ten coins of between one and fifty cents. Thus, up to one hundred twenty-five euros is accepted per spin. In this model, there are special characters, themed bonus round and numerous other features. You need to get on the line from three identical images that should be placed side by side, starting with the first reel. The payout amount depends on the bet on this line and the combination ratio (the maximum multiplier is x1000). With each line, the winnings are charged only for the highest combination. 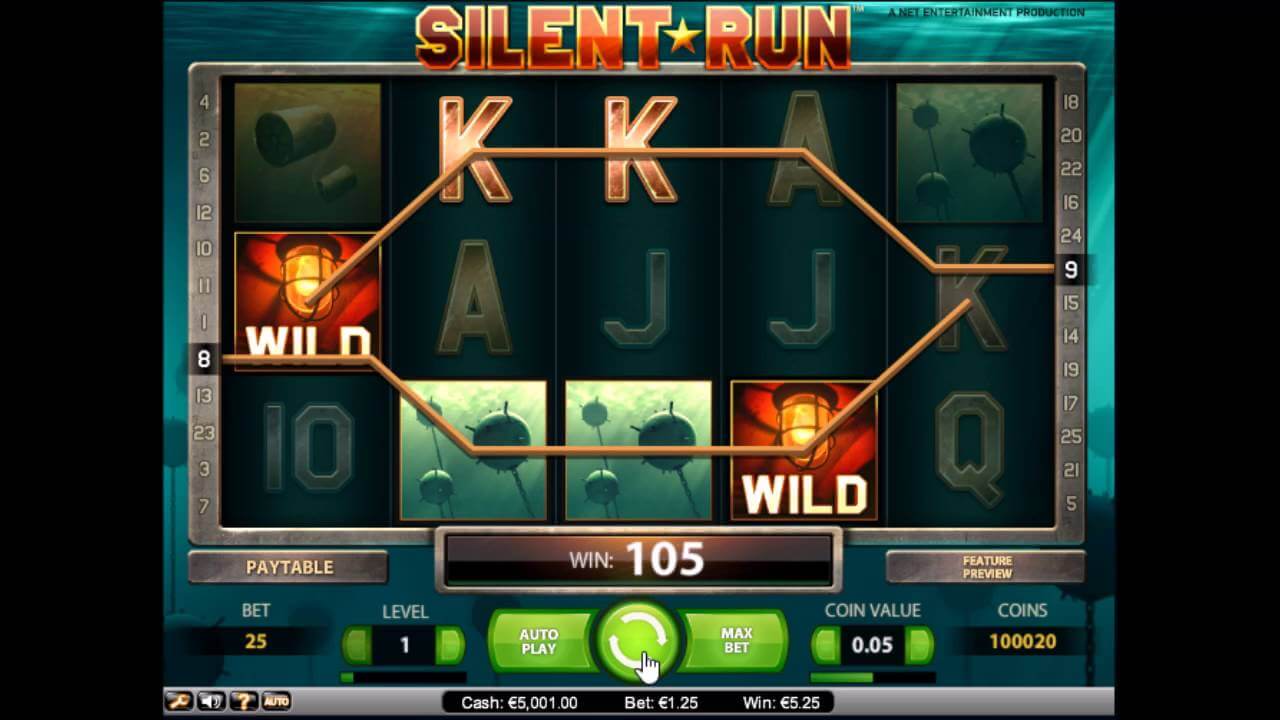 Since the Silent Run video slot is dedicated to the navy and submarines, all the pictures on its reels are directly related to this topic. On the game screen appear ships, submarines, torpedoes, depth charges, mines, as well as denominations of playing cards from tens to ace.

Special characters are Wild (hazard red flashlight), Echo Wild (red locator screen) and Echo Bonus (green locator screen). Wild is able to replace other ordinary pictures, if its position on the reels allows you to help make a combination of them. Echo Wild can only be seen on the third reel. When he appears there, he sends three signals that detect hidden Wild on the screen. Echo Bonus - appearing on the third reel, this symbol gives a start to a thematic bonus round.

At the beginning of the game, the Echo Bonus symbol finds hidden torpedoes on the screen. They can be from two to five. They will be at your disposal further when you need to shoot at the ships. Each launch of a torpedo, as a result of which the enemy ship goes to the bottom, will bring you a payment of a random size. With each shot, a special additional multiplier of winnings will increase, which can reach x10. At the end of the round, all earned prize payouts will be transferred to the user's account. The maximum amount that can be obtained in the bonus game of the Silent Run video slot is equal to 256,600 coins.

The most attractive feature of the Silent Run video slot is a themed bonus game in which you need to tackle enemy ships. If you are lucky enough to get five torpedoes, a solid prize is guaranteed. Also, Silent Run can be commended for high-quality graphics, realistic animation, spectacular sound, intuitive interface, the presence of settings, a good percentage of feedback and so on.