Owl Eyes is a five-reel video slot. Pictures on his screen are placed in four rows. Playing the gaming machine is allowed for any number of active lines up to fifty (their arrangement is shown in the paytable). A bet per lane is allowed in the range from one cent to two euros, and up to one hundred euros per round is accepted.

The set of features of this model includes special symbols, free spins with additional features, extra multipliers, a risky game of chances and other options. To become the owner of the payment, you need to receive on the active line a continuous sequence made up of several identical images. It should start from the first reel on the left, and only the highest combination in each chain is a winning one. 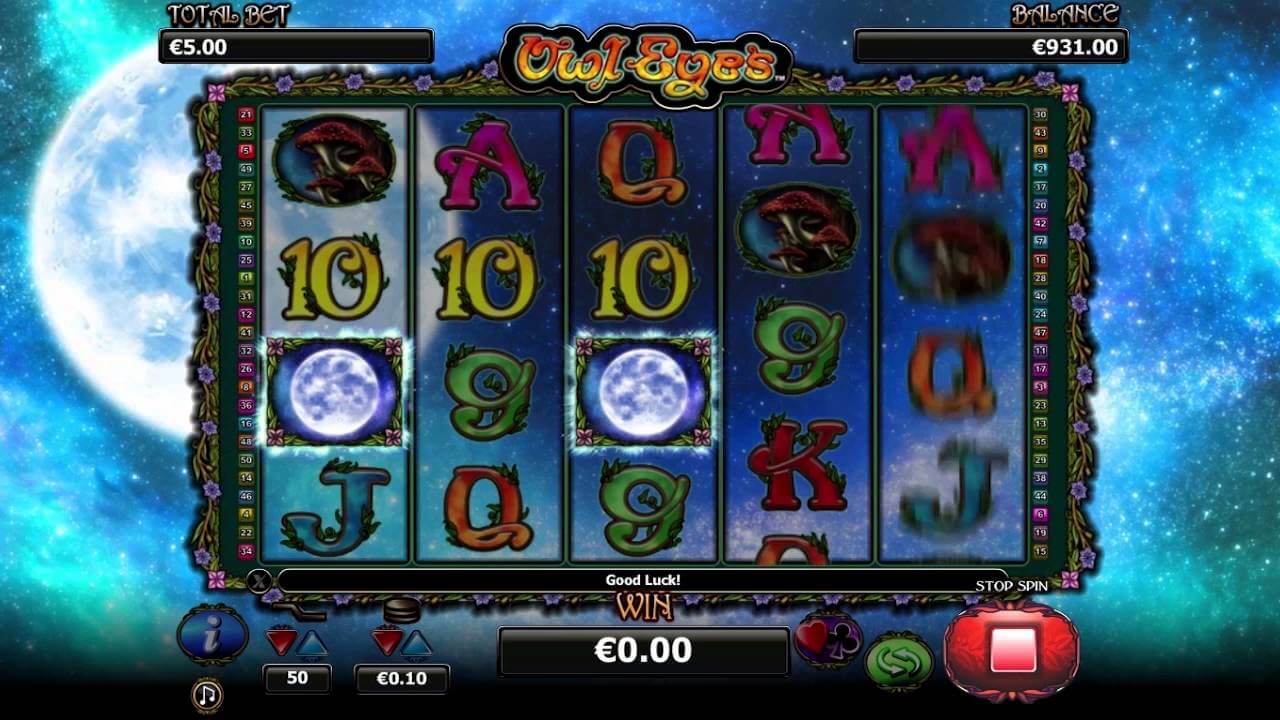 To determine the payout amount, the bet made per line is multiplied by the coefficient specified in the rules (maximum - x1000). If there are several combinations, the payments calculated on them are summed up. The money won as a result of the spin can be picked up or put on the line in a game of chances. In this round, you will guess the color or the suit of a closed card. In this case, you decide which option to choose. If you manage to name the color, the payout will double. If you can guess the suit, the amount will increase four times. In one approach, you can play no more than five times in a row, but without the right to make mistakes.

When you open the Owl Eyes slot machine, you will see magic trees, mysterious mushrooms, a cute badger, a bird’s feather, as well as multi-colored denominations of playing cards from nine to ace on the screen. We should also discuss the special characters, which are Wild (owl) and Scatter (full moon).

• Wild is not able to pay by itself, because it appears only on the three middle reels. At the same time, it goes in stripes and can occupy a whole column. The main function of this element is to replace other pictures in combinations (except for Scatter), doubling the winnings on them. For this, he must be in a suitable position.

• Scatter differs from other symbols in that it is paid in any position regardless of its location. In addition, the winnings are calculated at the total rate per spin (five, twenty or one hundred for three, four or five scatters).

Three or more of these pictures, which are simultaneously somewhere on the screen, begin five free spins at the last bet.

Drums rotate on a very beautiful background with the image of the night forest. Flickering lights fly in the air, animals are shown among trees, fireflies are visible on the grass - all this creates an atmosphere of mystery. Brief hints and explanations can be seen in a special line under the reels. From the settings available only mute.

A video slot may be of interest to fans of such gambling entertainment with a large number of combinations being formed, very favorable free spins and special character abilities. Its advantages include a wide range of rates, a clear control panel, no need to download the game and nice graphics.