It is curious that the Italian gangsters acted in Chicago by their laws and had no relation to the traditional mafia. The founder of the local syndicate called the owner of the network of brothels "Big Jim" Colossim. Later, many of the legendary personalities of the criminal world also decided their affairs in Chicago.

At present, only a handful of criminals have remained from the once formidable syndicate, which can hardly be called criminal bigwigs, and we can safely say that his era has finally gone. Recall about it will help the free slot machine Kings of Chicago, which was released by Net Entertainment.

Kings of Chicago is an unusual new video slot with elements of card games, dedicated to the theme of the Chicago gangsters. The game has five constantly activated lines and five reels, the role of which is played by cards. You can bet from one cent to ten euros per line. In total, playing the slot machine is allowed at a rate of up to fifty euros. 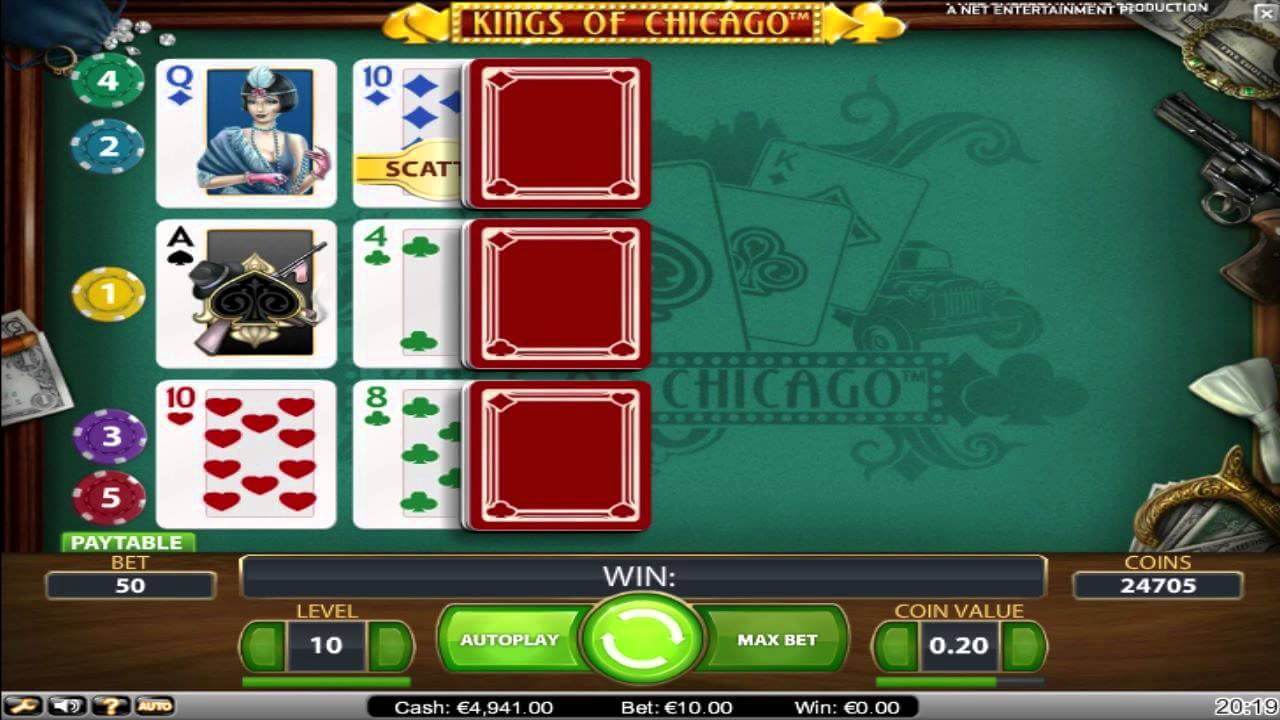 In this slot are paid poker combinations that are formed on the line. The minimum of them is Three of Kind, the maximum is Natural Royal Flush (without the joker). Also here is a combination of four of a kind with a joker, which is the second in importance. The largest payout ratio is x10,000. At the same time, the cards included in the paid combination can be in any position on the line (not necessarily close).

The symbols of the Kings of Chicago slot are playing cards from deuce to ace of four suits. Also in the game there is a joker, which is not paid by it, however, it replaces any other cards and participates in the formation of specific combinations (Five of a Kind and Royal Flush). In doing so, he doubles the payout. Scatter may appear over any map. This happens in random order. Such symbols are paid regardless of the location on the screen. Two, three, four or five Scatter are paid in the amount of five, fifteen, fifty or five hundred total rates. Three or more Scatter also trigger free spins with double the odds. There may be ten, fifteen or thirty, depending on the number of characters. They are played at the current rate and can be extended.

In an unusual way, a spin is played in the Kings of Chicago slot. There is no rotation of the drums. Cards, which play the role of symbols, are dealt in three hands from left to right. Four of them in each row immediately appear face down, and the fifth turns over last. This creates the illusion of playing cards.

Understanding the purpose of the slot controls is easy. The game data appears in the Bet (total bet), Coins (account balance) and information line under the control panel. Custom settings provide an opportunity to activate fast spin, turn off sound, choose the quality of graphics and make other changes.

Slot machine Kings of Chicago will appeal even to those who are indifferent to the gangster theme. The highlight of the slot is not that. He is pleased with the originality of the gameplay, the presence of poker combinations, free spins with increased odds and other features.