Golden Princess has five reels. When they are stationary, fifteen characters are visible on the screen, which line up along a 5x3 grid. Users can play the slot machine by activating from one to twenty-five lines. Rates for these positions are always equal. The valid range ranges from one to ten coins of one, two, five or ten cents. The main goal is to receive payments for continuous chains on active lines made up of identical elements. They can start only from the first drum on the left. Only the longest combination in a single taken position gives a win, but there can be several sequences in the same back on different bands. 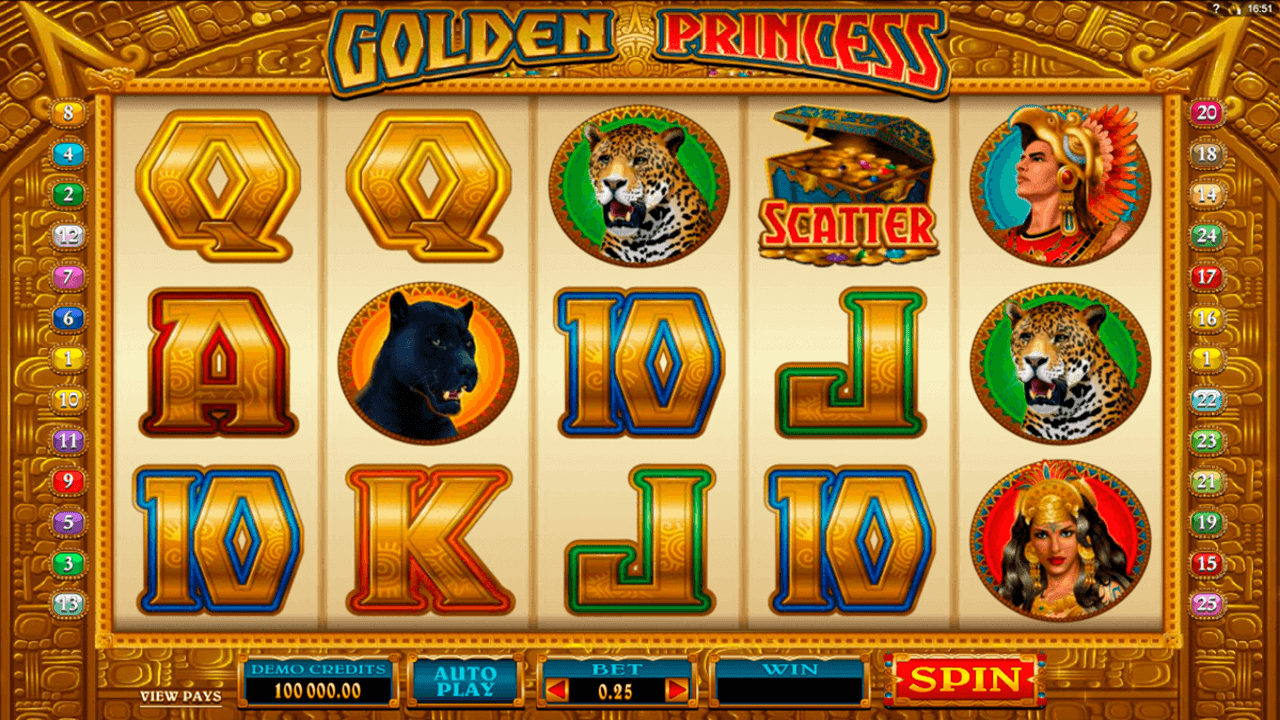 The size of payments depends on two indicators: the line bet and the coefficient of the resulting combination. The calculation is made by their multiplication. In Golden Princess, odds are from x5 to x5000. There are also characters that do not operate according to general principles. The client can pick up the money won for the round immediately or bet on the risk game. It runs on an additional screen. The user decides that he will guess: color or suit. If he manages to determine the color, the payout will double. Properly named suit increases the amount four times. Rules are allowed to play several times in a row until the limit is reached. At the first error the client loses money.

The main characters of the video slot are the princess of the people of South American Indians and the warrior in ceremonial attire. On the reels you can also see the panther, leopard and gold card values from ten to ace. The special functions are performed by the symbols Wild (game logo) and Scatter (a chest with gold):

A very convenient system is provided for choosing a bet in Golden Princess. You can simply specify the amount you want to bet on the round, or you can click on the appropriate window to bring up the pop-up panel. It is possible to determine the number of active lines, the rate in coins and the denomination of the chips involved. Having started the drums, you can immediately stop them by clicking on the same button. With the help of the autogame mode, you can even accelerate the gameplay. Golden Princess offers a number of custom settings: activating a fast spin, turning off a risk game, quality of graphics and animation, adjusting the soundtrack, and choosing balance display units. In addition, there is a statistics window.

The game is a typical sample of Microgaming products. It is very high quality, interesting and spectacular.