This slot invites you to a walk around a fabulous enterprise, where gold bars, coins, and other products are stamped in such quantities that they have to be exported in whole wagons.

Gold Factory is a gaming machine with five reels and fifty lines. It has two bonus rounds, free spins and special Wild and Scatter symbols. On each line, you can bet from one to twenty coins, and the value of the coins varies from 0.01 to 0.1 credits. This means that the maximum bet per spin is equal to one hundred credits. Here, according to the established coefficients, combinations consisting of three or more identical pictures on the active line, located on the adjacent reels, starting from the first one, are paid. The maximum payout is x10,000 (20,000 credits at the maximum rate). There is no risk game in the Gold Factory slot. With conditional bets, the same rules apply as in a real game.

On the reels of the Gold Factory gaming machine, the owner of the factory, the young researcher, the factory itself, various means of transport (train, airship, and submarine), gold bars and coins are depicted. Wild is the brand logo of Gold Factory. These symbols themselves form combinations and also become in the place of other pictures if it helps to get paid. Bonus is a gold coin. Combinations of these symbols are paid for maximum coefficients. From three Bonuses in any places of the screen - bonus round will start. 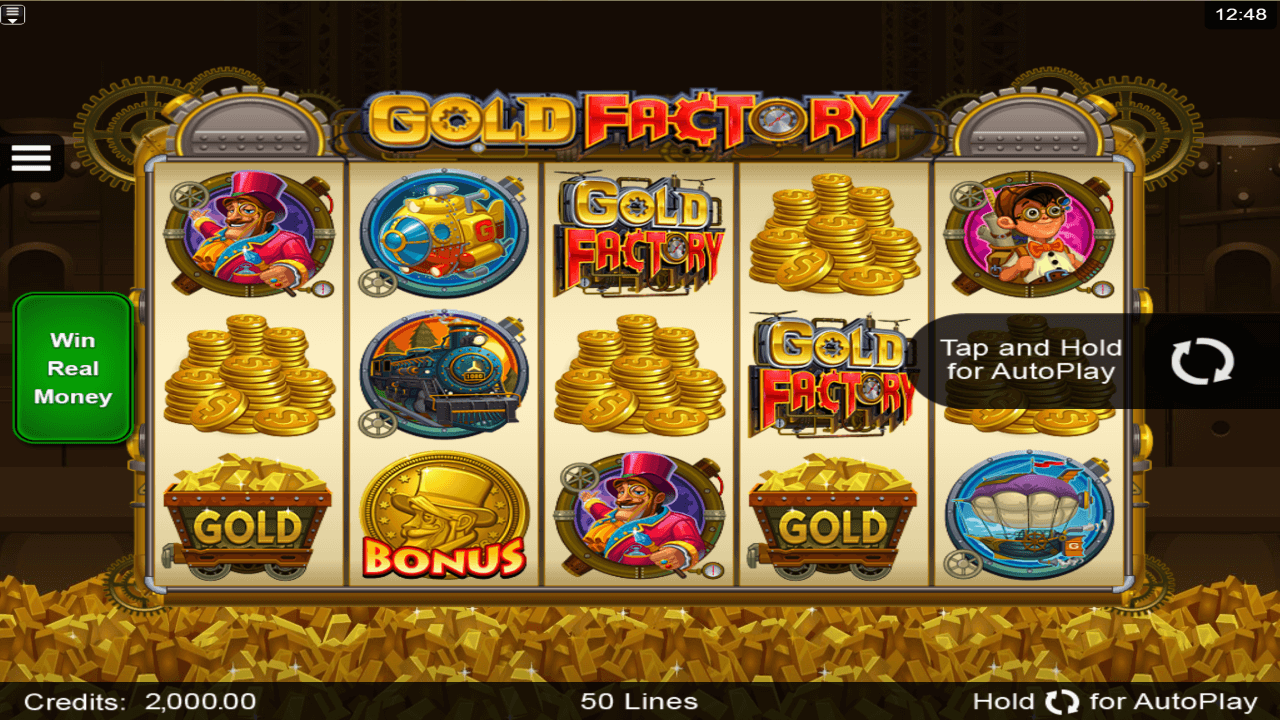 The bonus game of the Gold Factory slot occurs on a separate screen. Events are unfolding in the boiler room of gold. The user must select four of the twelve boilers, revealing the prizes hidden in them. If he gets the Free Spins symbol, he will receive from ten to thirty-five free spins with double payouts. They play the game at the current rate and the number of lines. If the player finds the Reactor Bonus symbol in the boiler room, he will proceed to the next stage, where he will also need to choose items that hide prizes until the Malfunction symbol is found. For each unopened item will be accrued a consolation gain in the amount of one total bet.

Externally, the gaming machine looks very impressive. Yellow color predominates in its design, although other bright colors are also enough. The interface is very convenient, the buttons are large, the fonts are well read. The machine has a number of user settings. All calculations can be carried out in coins or credits (monetary units). You can activate fast spin or turn off the sound. If you select expert mode, the AutoPlay button appears. It is also possible to see the statistics on the game.

Gold Factory is just a great gaming machine, devoid of any flaws. Is that fans of progressive jackpots may complain that here they are not played. In the rest, the slot causes only positive emotions. Here special symbols often fall out and often combinations are formed that are paid for by large coefficients.