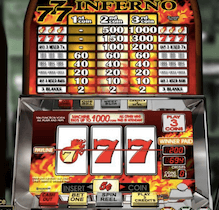 The world of online gambling is constantly evolving. New releases and opportunities are comping up every day. In this article, we’ll talk about unconventional slots that stands out from the rest. A few years ago, such games were extremely hard to find online. Luckily for gamblers, the situation has changed. Today, you can test exotic slots on literally any gambling site. They are exciting and generous., so be sure to give them a try. Let’s focus on multi-screen slots, slots without paylines, and 3D machines.

Most slots have just one main screen on which the reels are spinning. There is also an additional screen where you can see rules and multipliers. To see the additional screen, you need to click the “Payout” button. However, only one screen can be active at a time.

At the same time, there are slots with two or more screens. It’s like a gaming app consisting of several individual blocks.

When you see more than one screen, you realize that you’re looking at a one-of-a-kind machine. It’s not a slot with an increased number of reels or other non-standard features. It’s a whole new type of games.

While slots by WMS Gaming are not as popular as games produced by other software brands, they are still well worthy of your attention.

On top of that, Zeus has a record number of paylines. This machine has as many as 100 paylines! This means that you can form a huge variety of winning combinations. Most gaming apps can only dream of such spectacular characteristics! This is not all, though. Free spins and high-paying symbols create even more money-making opportunities. With features like these, Zeus gives justice to its powerful name!

Roman Chariots is another signature slot by WMS. While most multi-screen slots come with 2-3 screens, this machine has 4 of them. It’s truly amazing!

The main game takes place on the main screen with 5 reels. Every time you hit bonus free spins with extra multipliers, you are taken to the additional screens.

Fire Queen boasts an impressive 3 screens. The best thing about this game is that each of its screens is nothing like you’ve ever seen in classic one-armed bandits. The main screen has 3 reels, with 6 symbols each. Regular slots only have 3 symbols on each reel.

In addition to the main screen, there are two other screens with 2 reels each. This brings the total of reels to 7. Each of the two additional screens has a 2x2 grid (4 symbols). The total number of paylines reaches 100.

Despite a bigger number of symbols, reels, and paylines, multi-screen slots are no harder to manage than regular one-armed bandits.

Most slots have paylines. A player can choose on how many paylines they’re willing to wager on.  This is a standard betting system which is familiar to any gambler.

What is a payline and how to use it

Each payline presents a unique way of forming winning combination.

For example, the middle payline is considered the main one. If a player only activated one line, it’s the middle line that will be used. If a winning combination came up on the upper line, you won’t get paid for it because your active payline is the middle one. To maximize your winning odds, you’ll have to activate all available lines.

If you’ve been lucky to land more than one winning combo on the same payline, you’ll only get paid for the longest one. Winning combinations are usually paid from left to right. However, there are machines where combinations are paid starting from the utmost right reel.

These are the standard rules that casino software brands have been sticking to for years and years. However, an increasing number of software developers are replacing classic paylines with new exciting solutions.

Some one-armed bandits have as many as 243 paylines which are all activated at the same time. When playing this type of games, you don’t need to think how many paylines to activate before each spin. If a slot has a 6th reel or extra row with symbols, it can have an even bigger number of ways to win.

Since all the available paylines are in play, the minimum bet is usually higher than in regular one-armed bandits. This means that 1 cent won’t be enough to make a spin on a slot with 243 ways to win.

In most no-payline slots, the lower betting limit stands at 10-20 cents. Yeah, it’s costly but it’s totally worth it!

One more advantage about no-payline slots is that they have special features that can’t be incorporated into regular apps with paylines. As a result, a player can capitalize on more money-making opportunities, including bonus games, gamble features, and so on.

Among all the innovative variations of one-armed bandits, 3D slots are second-to-none. Crispy grahics and mesmerizing special effects deliver a unique gambling experience. Beyond that, these apps are packed with exciting features that make your head spin with opportunities!

Microgaming and Playtech were the first software brands to incorporate 3D technologies into slot machines. The first apps with 3D elements appeared in the early 2000s.

At first, the evolution of 3D games was slowed down by limited capacities of computers. Speaking in plain language, every time a player opened a 3D game, their PC started to lag and freeze. Needless to say, it was a huge inconvenience. On the brighter side, the number of casino clients, whose devices were powerful enough to run 3D slots, was growing fast. By the mid-00s, software producers started to mass-produce gaming apps with 3D effects.

Every time you land a winning combination, you hear a triumphant sound or see a funny animation on the screen. On top of that, modern apps have high-quality soundtracks that can be considered pieces of art in their own right.

At the same time, not all 3D slots are packed with extra features, bonus rounds, and multipliers. There are gamblers who prefer classic 3D apps with a standard set of features. The thing is some players find side games and special features too distracting, preferring to focus on the main game.

By the way, software developers even came up with 3D versions of slots that were released 15-20 years ago. The new technologies breathed a new life into old apps. This is an ideal example of how innovation and tradition can work together to create something new and unique.

Regular 2D slots didn’t go anywhere, though. They have a huge fan base, and you can still find them on any gambling site. Regular one-armed bandits have a streamlined gameplay and simple rules. Unlike 3D slots, they load faster. Since casino clients like 2D apps, software manufacturers have not the slightest intention of shutting down their production.

Some 10-15 years ago, the Volcano slots were the most popular games in land-based casinos.

When brick-and-mortar casinos were banned, the Volcano universe moved online. And you know what? That drastic change gave a new life to the one-armed bandits. Passionate gamblers got a fantastic opportunity to make free bets and enjoy gambling for hours on end without worrying about money. If you’re among those who don’t care about actual winnings, you’re sure to like the demo mode.

How To Gamble For Free

You can access the Volcano slots absolutely for free. By playing in the demo mode, you can test any gaming app and see whether you like it or not. If not for the demo mode, you’d have to risk your hard-earned money on a slot you know nothing about. This can’t be fun!

If you start playing, you won’t be able to stop. The Volcano slots leave no one indifferent. The beautiful thing is that you don’t need to register an account to play do free. Any user can start a free slot right away.

The Volcano brand was a household name for hardcode casino enthusiasts who started their gambling careers in the 90s. Back then, the Volcano slots were well-known across land-based casinos in the post-Soviet states.

The Volcano gaming apps were developed by several European software brands. Among the manufacturers was the iconic Novomatic which is known for its super popular Gaminator series.

The games were nicknamed “Volcano” after the name of the casino chain where they available. It needs to be said that the Volcano casino chain has nothing to do with the development of these one-armed bandits. However, the increasing popularity of the Volcano casinos boosted the sales of Novomatic machines. So despite some confusion, it was a win-win situation.

After its digital switch, the Volcano brand started to produce the online versions of their iconic games. For some time, the brand didn’t release any new titles, and online gamblers had to settle for the old apps.

However, as the times were changing, Volcano had to look for the ways to attract a new audience that knew little no nothing about the iconic brand. The developer started to add new titles to its already massive collection. This is how the Volcano brand entered into a new stage of its journey.

There is plenty of gamblers who have stayed loyal to the Volcano slots throughout the years. They love both old and new gaming apps. A reliable and integral software brand like that definitely deserves a strong following!