The Most Anticipated Online Slot Machines of 2019 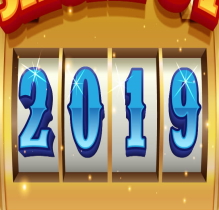 Many new games will be released this year, so gamblers began to compose their wish-lists back in 2018. Slots of popular themes with thoughtful plots, unusual innovative chips, and interesting mechanics were in the top of the most popular slot machines.

The gloomy and atmospheric Thors Lightning slot tells the story of Odin's son. A slot machine with a plot based on Scandinavian mythology is developed on the basis of a cluster system. The classic reels have been replaced by a 7x7 playing field in which winning combinations are formed from sets of symbols next to each other and then burned out.

The developers at Red Tiger supplemented the cluster payouts with two bonus features, Lightning of the Thor and Hammer Strike, and the designers carefully worked out the graphics and plot.

Treasure Horse and Mustang Gold slots are united not only by the name of the eminent developer but also by the similarity in themes. The main characters in both games are based on the image of horses. Mustang Gold slot machine tells about the difficult life of a cowboy in the Wild West.

The tense atmosphere will not let gamblers get bored, and you can lower the general degree of excitement in Treasure Horse. This gaming machine uses Asian motifs seems to be specially created for relaxation and contemplation. As a scatter, it uses an elegant golden figurine in the form of a horse standing on its hind legs. There are only three reels in this video slot, but right there on the playing field, a separate drum is used to determine an additional multiplier of the initial bet, which makes the gameplay even more fun.

Microgaming decided to keep up with its competitors and announced the release of a new slot about the adventures of Lara Croft. The product, created in conjunction with Square Enix, will be a continuation of Lara Croft Tomb Raider (2004) and Tomb Raider: Secret of the Sword (2008). The developer has kept the plot features secret.

Obviously, the release of the new part of the Tomb Raider game series is associated with the success of last year's film about Lara Croft. It is likely that the main character of the Microgaming slot will have a lot in common with Alicia Wikander, who replaced Angelina Jolie.

High-quality sports-themed gaming machines do not appear so often, therefore they attract special attention of gamblers. In 2019, Playtech plans to surprise fans of Formula 1 with the Wheels N Reels video slot. The developer promises a plot development, a design understandable to car racing fans and an original Pit Stop bonus.

Choosing NetEnt, at first glance, does not seem so advantageous. The legendary creator of online gambling entertainment has relied on horse racing. To develop the Scudamore’s Super Stakes slot machine about horse racing, the studio brought in renowned professional jockey Peter Scudamore. The company promises to add scenes with stages to the slot and focus on the competitive process.

One of the most anticipated releases in the gambling industry in 2019 from the point of view of interest in the inexperienced audience's project can be Microgaming's Village People Online Slot. The developer acquired the rights to use the music of the disco group from ITVS GE, so gamblers will be able to enjoy hits such as Y.M.C.A., Go West and Macho Man while spinning the reels. Fans are also promised a meeting with the legendary members of the collective Cowboy, Builder, and Biker.

The musicians will go back to the 70s to conquer the dance floors again with their songs. Details Village People Online Slot is still a secret, the release date is also TBA, but it will be somewhere in 2019. The only thing the company representatives say is that the slot will be available to all operators working with Microgaming.

Before waiting for new slot games, you can try all-time favorite slot games at our website completely for free.