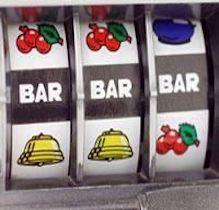 When playing a classic slot, you can see a standard set of already iconic symbols, such as Bar, Bell, Cherry, Seven, and so on. What is the story behind these images? And which symbol is the oldest of them all? In this article, we’ll embark onto an exciting journey into the past and find out how the all-familiar images made their way into the world of gambling.

Nowadays, even those who have never played a retro slot in their entire life, know the vibrant fruit symbols displayed on the reels. We bet you too know them from movies, TV shows, computer games, and YouTube videos! But if you think that fruits are the oldest slot symbols, you’re mistaken. The truth is that the prototypes of the first slot machines were video poker games. In the 1800s, poker games were an organic part of every respectable American bar. The creators of the first one-armed bandits were heavily inspired by poker games. It’s not surprising that the first slot machines featured card symbols on the reels. Now you see that poker and slots have much more in common that you’ve thought.

Liberty Bell And Its Symbols

The pioneer slots had one peculiarity – they could not pay out winnings automatically. If the player won a cash reward, it was the bartender who paid out the money to the lucky gambler. In 1895, an inventor named Charles Fey came up with the first fully automated slot. The new model only had 3 reels and 5 symbols. The symbols included the iconic Liberty Bell, horseshoe, and three card suits (hearts, diamonds, and spades). By the way, the Liberty Bell symbol gave its beautiful name to Fey’s machine. For some mysterious reason, Charles Fey neglected to patent his revolutionary invention. As a result, his design was copied, and 3-reel slots became wildly popular. As for the horseshoe symbol, nowadays we don’t see it much on the reels.

Why? Probably because it was replaced by Seven – another legendary symbol that is considered to bring luck.

So far, we haven’t found any trace of fruit symbols in the old slot machines! How did they even come into existence? To find that out, let’s fast forward to the early 1900s when slot machines got banned for the first time. The reason behind the ban had to do with the fact that slots stripped people of their money. As a result, the state decided to intervene and put a stop to the mischief done by the one-armed bandits. Luckily, gamblers were not ready to abandon their passion for slot machines. Slot producers came up with brand new symbols – colorful fruits and bubble gum. Why exactly these symbols? If the player lined up three matching images on the reels, they got a delicious bubble gum with a fruity flavor. That new type of slots got nicknamed “vendor machines”. One of the slot manufacturers – Bell-Fruit Gum Company – decided to add its logo onto the reels. Looking like a bar of gum, the logo slowly transformed into the BAR symbol as we know it today. Fruit symbols stood for different flavors of bubble gum. Yes, this is the fascinating origin of fruit images that can be seen on the reels of any classic slot!