Can You Cheat Online Pokies? 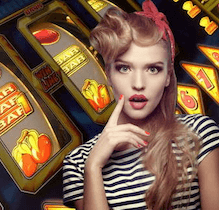 We bet that many gamblers would like to find a way to make steady winnings on pokies. In the search for a magical solution, users apply illegal methods and tricks to beat pokies and get access to unlimited winnings. The result is always the same: a casino blocks a dishonest player’s account and freezes all money in it. Modern casinos are using advanced safety systems that make cheating impossible – or, at least, highly unlikely.

One of the most common ways to cheat casino games is by using special software that interferes with the operation of a pokie. Hackers install such programs on online casino servers to change the settings of one or several apps.

Such programs are a real way to make illegal money on casino games. At the same time, this method is too techy and is therefore unavailable to common users. To be able to benefit from this approach, you need to be a professional hacker.

Using other people’s personal data is another way to cheat a casino. As you probably know, users under 18 are not allowed to play pokie machines (or any gambling games, for that matter) for real money. To overcome this restriction, underage users enter personal data of their parents or relatives in order to register a casino account and get access to real-money pokies. Most of the time, fake accounts get blocked and users have to pay their winnings back to the casino.

By using other person’s personal and payment data, you can get access to real-money games. However, it will only continue until a casino decides to verify your account, e.g. by getting in touch with you via web camera to make sure you’re who you’re claiming to be.

Using other people’s documents and credit cards is a serious crime that can bring you lots of trouble. It’s a very risky affair that you may regret later.

Although all gaming apps are thoroughly tested before being supplied to online casinos, occasional glitches and bugs are inevitable. There are players who scan apps for errors and use them to change pokie settings in their favor.

A flawed pokie may act weird. For example, a regular combination of symbols may trigger a mind-blowing payout. Sooner or later, a casino detects and corrects a bug but by that time hackers might have already stolen a lot of money. By the way, if you’re determined to look for vulnerabilities, you’re more likely to find them in new gaming apps rather than older ones.

Online pokies are surrounded by myths and legends. However, all of them result from wishful thinking of gamblers who dream of beating a casino and making a fortune. Such myths can be very confusing for naïve users that risk losing their entire bankroll while chasing illusory winnings. In this article, we’ll bust the most common myths about one-armed bandits.

You Can Beat Casino At Pokies

The most popular lie is that you can make consistent winnings on pokies. Gamblers apply winning strategies, press secret combinations of buttons, and do other useless things in the attempt to trigger high-paying combos with minimum efforts.

Needless to say, there is no way to ensure a series of guaranteed winnings at pokies. This doesn’t mean that you can’t win, though! You can, but the odds will always remain in a casino’s favor.

Remember that all winning systems designed for pokies don’t work in real life. If someone is telling you that they’ve found the optimal strategy for pokies, they’re either lying, or are confused themselves.

At the same time, there is always a possibility that using a winning strategy may coincide with your lucky streak. But it doesn’t mean that these two facts are interconnected.

Discussions around this myth are unlikely to ever stop. Some gamblers firmly believe that casinos change pokie settings in their favor.

We won’t deny that rogue gambling sites may be actually doing that. You may come across one-armed bandits with low RTPs that won’t let you enjoy frequent winnings like they’re supposed to.

At the same time, it’s highly unlikely that major casinos would be involved in such dangerous practices. Remember that gambling sites are rigorously controlled by both regulatory authorities and software manufacturers. By the way, only software providers have access to the program code of their apps. Casinos simply make them available on their websites.  Beyond that, no respectable casino would risk their reputation and image by rigging up gaming apps.

Some Pokies Are More Generous Than Others

This myth is not entirely false. Some one-armed bandits are indeed more generous than others, i.e. they generate more winning combinations. The reason has to do with varying technical specifications, such as RTP and dispersion. However, few players are attentive enough to notice the difference.

Most of the time, casinos don’t make RTP numbers publicly available. Instead of giving RTP for each gaming app, they give the average value for all their pokies. This way, gamblers can only speculate on what the RTP value the game they’re playing may have.