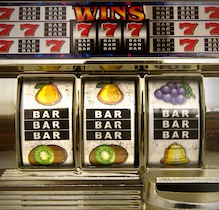 Along with cherries, stars and sevens, Bar is an iconic slot symbol and true staple in the gambling world. But have you ever thought where the Bar symbol came from? We bet you haven’t! Well, to answer this question, we need to go back in time and explore the milestones in the evolutionary journey of slot machines.

The first fruit symbols appeared in slots in the early 1900s. Attractive and alluring, the new machines had juicy fruits depicted on their reels — melons, oranges, apples, plums, and others. At the time, gambling for real money was banned by law. Slot manufactures came up with a smart solution. Instead of cash, such slots rewarded players with fruit-flavored gum.

One of the brands that produced the so-called “fruities” was Mills Novelty Company owned by Herbert Mills. Soon, Mills decided to add a new symbol to the reels. It was the picture of a chewing gum which was later followed by the now iconic Bar symbol.

In 1906, Mills came up with a new variation of the iconic Liberty Bell, the first mechanical slot in history. However, every gambler knows that Liberty Bell was created by no other than Charles Fey. Fey manufactured about 100 Liberty Bell machines which were used in San Francisco saloons and bars. However, due to the devastating earthquake of 1906, the majority of Fey’s machines were destroyed.

It’s known for sure that Fey had no intention to sell his ingenious device. This makes us wonder how Mills got access to Fey’s design? According to some sources, the two men worked together. Another hypothesis says that Mills got his hands on Fey’s gambling device following a saloon robbery.

While there are other theories on the origins of the Bar symbol, most researchers agree that it’s just a modified image of a chewing gum. It could’ve also been a corporate logo used by the the Bell-Gum Fruit company.