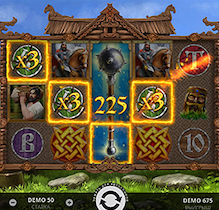 Modern online slots boast a bunch of features and options that allow players to customize the gameplay based on their preferences. A few decades ago, keen fans of one-armed bandits could only dream of such extravaganza.

It goes without saying that gamblers love slots mainly for their simple rules and frequent payouts. However, as the gambling industry is advancing, casino users are becoming increasingly picky and demanding. This urges software providers to pack slot machines with exciting innovations that take a player experience to a new level.

Out of a striking variety of features, in this post we’d like to focus on Auto mode. As you know, he majority of slots have few settings which makes them extremely easy to play. However, if you can’t stand the thought of hitting the same button all the time, you can take advantage of auto mode.

It needs to be said that the idea of auto mode is not a new one. The predecessors of modern slot machines had the Auto button that started the reels for an indefinite number of auto spins. While not the best solution, it was still a big step forward.

Luckily, technology doesn’t stand still, and advanced slots have much more to offer in terms of Auto mode.

For example, now a player can decide how many spins a slot will make in Auto mode. That was a highly anticipated feature because it allows to avoid uncontrolled losses. Earlier, players could only launch auto spins for an indefinite period of time. As a result, they had to stay glued to the screen, trying to catch the right moment and stop the game before their losses get too big.

Plus, you can set a stop loss and stop win. Once your losses or winnings reach a certain level, the game will stop automatically. When it comes to bankroll management, this feature is indispensable. It helps you control your emotions and quit at the right time.

Finally, you can increase or decrease the time interval between spins. It’s a great feature that allows you to set a comfortable pace of the game.

Keep in mind that not every slot has extended Auto mode settings. On the brighter side, you can set the number of auto spins in any modern slot.

During Auto mode, the size of bet and number of active paylines stays the same. If you’re lucky to trigger a bonus feature or risk game, Auto mode will be suspended and you’ll have to resume manual operation.

Errors and failures can happen in any industry. Gambling is no exception. Software developers are only humans and they, too, make mistakes.

The history of gambling knows cases when big wins – and even jackpots – have been cancelled due to technical failures.

Imagine hitting a juicy win and then finding out that you can’t get your money because there was a software error!

Covered in newspapers and discussed on gambling forums, such stories create a lot of backlash. It’s a hard blow on the reputation of the casino and software provider alike.

Upon seeing the congratulation message on the slot screen, the gambler went crazy with joy. However, the casino refused to pay out the money to Venturi. As it turned out, the slot was flawed. It displayed the winning message by mistake! Unwilling to give up, Venturi took the casino to court but lost the case.

It’s not uncommon that software providers produce rigged casino games. Let’s take the case of a software provider BLR that operated under the Costa Rica license. In 2011, the company launched a new craps app. After a while, gamblers started to notice that it was impossible to win the game. More than 1000 casino users have fallen victims to that scam. While the app was taken off from the market, players didn’t get any compensation.

Another story – with a happy ending though – took place in the PokerStars poker room during a tournament. Due to a software error, the number of participants was cut down twice and the prize pool was doubled. As a result, those who made it to the final round, ended up winning more money than expected. The poker room set a good example by recognizing the mistake and letting the results stand. Needless to say, the happy winners had nothing against!