Review of the new 11 Champions slot 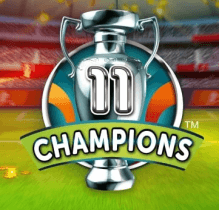 Looking forward to the European Soccer Championship? So are we! It was postponed to the middle of the 2021, but no need to get upset. Microgaming has prepared a surprise for all soccer fans - a new online slot - 11 Champions. Soon every mobile casino will launch this game, so you can try your luck in it. In the meantime, we have prepared for you a detailed review with all the options and features of the new online slot machine.

Although we say that the game is represented by Microgaming, the developers are actually Gameburger Studio. They are a young talented team who developed the game exclusively for Microgaming. Lately it has become a common practice for gambling giants to sponsor teams of talented game developers and release games together. Large companies get first-class slots, and young developers get a chance to launch their games in a ready infrastructure: any mobile casino for real money will be happy to host slots from a well-known manufacturer.

A great example of such cooperation is Fortinium online slot or the recent Wild Catch, which was created by Stormcraft Studios for Microgaming. These games are so popular that it's hard to find a mobile casino that doesn't have them. But will 11 Champions prove to be that good? Read our review to find out for sure!

If you look at the gambling blogs (like ours), it is easy to see that every year a huge number of online games are released. The only pity is that many of them look like twin brothers. Standard reels, universal mechanics, nothing new. It's nice that 11 Champions is an exception!

So, what is unusual about it? First of all, it's the unusual layout of the reels. Instead of the usual 5x5 field, you will find here a horizontal Action Reel™ layout. On it we will stop in detail a little later. Another important point is the dynamics. In 11 Champions online slot you're not just a passive observer, you're a player who has to outrun your opponents and score goals. The game aims to give you a feeling of total immersion in the atmosphere of a soccer match. You will have to choose positions, pass and score goals. And, of course, receive a well-deserved reward! The game has several jackpots that will add a little adrenaline to the gameplay. All in all, we liked the atmosphere in 11 Champions, it's bright, intense, dynamic, full of excitement and ineffable soccer action. After all, that's exactly why we love soccer and casino games for money, right?

The key mechanics of the new online slot

The first thing you should pay attention to is the choice of position before starting the game. The Action Reel™ system is responsible for this. It determines the positions on the field and also activates the Blazing Wild Streak™ feature. At the very beginning of the game, you can choose a new position for your player. Once you start spinning the reel, your player can circle the ball, or he can pass. And the best part is that you can score goals! As a reward for each goal, you get a free spin with a multiplier. So, your chances for big winnings are high!

Microgaming knows what players like best, and that's why there are four different jackpots! When 3 Scatter symbols fall on the field, the player gets into the jackpot round. He has to pick cards until he collects a set of three. Depending on the cards collected, you will get one of four jackpots: Grand, Major, Minor or Mini.

What else do you need to know?

Pay attention to the trophy symbols. When you collect three trophies, you get a bonus that can be used to pick cards during the jackpot round. And that means you can get x5000 of your bet! There's another nice bonus: you can change the colors of the interface. Choose the color of your favorite team to make your immersion in the atmosphere of a soccer match even more complete.

Conclusions about the game

Any casino will only benefit from 11 Champions online slot. We like its excellent dynamics, drive and the opportunity to feel like a soccer star. The elaborate mechanics, including the unusual reel layout, are not the least of the factors. The player gets more opportunities to participate in the gameplay. And a nice bonus was the ability to change the color scheme of the game, customizing it to your liking. And most of all we liked the opportunity to hit one of the jackpots!