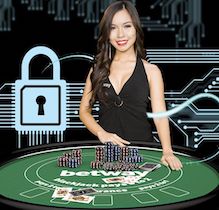 Earlier, the MD5 algorithm was actively used to encrypt casino data, ensuring high levels of security and transparency. MD5 was an indispensable helper to any gaming site that wanted to protect its reputation. Nowadays, this method is hardly ever used any more. Read on to find out why!

The first casinos used the MD algorithm to prove to players their honesty and integrity. After all, clients trusted their money to the online casino and had every right to know how gambling games worked. The MD5 algorithm solved that task in a simple and elegant way.

Ok, so how did the algorithm prove the gambling site played fair? Before the game, the random number generator created a string of repeating combinations. If fact, that dataset showed what spins will trigger winnings in the upcoming game. (Or, in case with roulette, what sectors will be hit by a ball.) The data were encrypted using the MD5 algorithm and sent to the player. As a result, the client received the data but could not read it.

After the game, the client received a password. The player used the password to open the file and make sure that the results of the spins coincided with the pre-generated combinations. At the time, the solution seemed very ahead-of-time. One by one, players started to develop more trust with gambling websites.

However, the joy from the new invention was short-lived, and the new method existed not long. It’s not surprising that some players immediately attempted to hack the algorithm to get access to the winning information.

For a long time, the attempts were futile. According to specialists, hacking the smart algorithm required very powerful computing capacities. There was no way common players had vast technical resources at their disposal. (To tell the truth, many big research centers lacked such capacities, either.)

Still, after several years of resistance, the MD5 algorithm finally caved in. In the early 2000s, the hackers revealed way the algorithm worked. It turned out that the algorithm could be decrypted literally on any desktop computer. Naturally, online casinos had to stop using that method. It was the end of the MD5 era in online gambling.