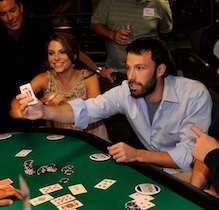 Talented musicians, actors, and painters tend to be passionate and emotional people. They can afford to have the most unusual hobbies yet many of them are crazy about gambling.

Of course, it’s beyond our power to make a full list of celebrities who are passionate about gambling —mostly because most of them prefer to gamble online where no one can see them. At the same time, there are Hollywood starts who don’t have the least intention to keep a lid on his love for gambling.

According to Frank Fahrenkopf, the head of the American Gambling Association, the thing celebrities value the most is an exclusive service. As for the selection of games, it’s not the priority for Hollywood stars.

George Clooney is a frequent guest at Las Vegas casinos. But the talented actor is not just a player. He is also interested in gambling as a business. It’s a known fact that Clooney has been nurturing the idea of purchasing a casino in Sin City. Who knows? Maybe while playing poker or roulette, the actor is calculating the potential profits from his future casino business? As for now, Clooney prefers to keep secret his plans regarding the acquisition of a casino.

Other Hollywood stars known for their gambling passion include Robert Downey Jr., Sharon Stone, and Brad Pitt. Naturally, they prefer to gamble in VIP rooms, away from other gamblers and the press.

Evert high-end casino has several VIP rooms for important clients. For example, there is no chance you can see Ben Affleck playing his favorite card games in the main casino hall. The famous American actor and director prefers the comfort of VIP rooms.

Did you know that in 2004, Ben Affleck won a prestigious poker tournament, beating his buddy, another American actor Tobey Maguire?

Jennifer Tilly, an American actress and professional poker player, is another celebrity who can’t imagine her life without gambling. In 2005, Tilly was awarded the WSOP bracelet and 160,000 dollars in prize money.

It needs to be said that Hollywood stars – unlike common gamblers – are indifferent to slot machines. They prefer card games instead, especially poker. This choice is not surprising at all because poker is an ideal playground for using their acting talents! We bet that even a seasoned poker player will have a hard time reading the smiling face of Drew Barrymore when she’s going all-in.