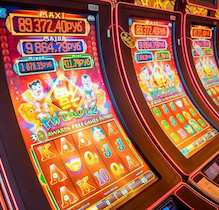 Over the last year more and more people have complained that they are not hitting as many jackpots as the used to. A few of my friends discussed this issue a while back and wondered whether the casinos have changed the settings of the slot machines so that the players would win less. This might be a result of the less frequent visits to the establishments which in turn has been because of the bad economy. At first I didn't pay much attention to this discussion but then I started to notice more people sharing the same thoughts on Internet forums. Many believed that the payback percentage of all the slot machines has been lowered.

Why Are Players Hitting Fewer Jackpots

In my opinion some of the casinos might have ordered new slots which are with lower payout percentage. However, I don’t think that this is the reason why many players are complaining of fewer winnings than before.

But, You always can play slots for free!

There have been numerous myths that the casinos can manually change the payback of each machine, but if you look into it, it turns out that this is not possible. In reality, the payback of the slot machines is determined by an internal chip which is set in the factory. If a casino wishes to do an alteration then it needs to change this chip. In most jurisdictions there is paper work that has to be filled and submitted to the Casino Control Commission for every such change. If you think about it such an operation would be very expensive and time consuming, so it is highly unlikely that any casino would decide to undertake such a costly procedure.

Many jurisdictions also require casinos to report their monthly overall payout percentages (California is an exception). Those numbers are a public record and could even be found in some newspapers and gaming publications. After I reviewed these figures for the past year, I found a very small change in the included casinos. There were actually instances where the payback has increased over this period of time.

My belief is that people are winning less not because there is a change in the slots’ payback but because they have been visiting the casinos less often. The whole thing is proportional – if you play less, you will see fewer jackpots as a whole.
Another reason might be that some people have decided to switch to lower denomination machines. The nickel and penny machines are known to have a lot of smaller wins, but only a few big jackpots.

If you are still not convinced that the casinos are not lowering the payback percentage of the slots, there are a couple of things that you can do. You can try playing on older slot machines since the casinos would not spend the money and time to switch the chip on those. You could also try out a new casino – it might bring you luck and it will surely be exciting since you will be changing the location and meeting new people.

Another option is to play video poker. This type of game will show you the payback by reading the pay table. Practice in advance and get a strategy card to use while playing.

Last but not least, you can always try table games. They offer better odds of winning, lower house edge and are super fun. Check if your casino offers lessons so that you can learn the basics since this is a common practice among the establishments around the country.

To finish off, I agree that some machines might offer lower payback, but I don’t think that it is as widespread as the rumors might have you believe. Don’t forget that each casino has a lot of competition and it cannot afford to drive away customers by offering games where nobody wins. At the end of the day, it is your right as a customer and a player to choose where you spend your time and money.