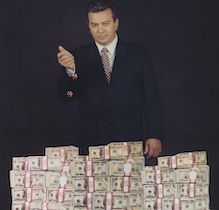 Sometimes, true dramas unravel at land-based casinos. Some of these stories even become inspiration for books and films.

Archie Karas started to play poker at the age of 19. He showed promise at the very beginning of his career. In the early 90s, Karas borrowed $10,000 from his friend and came to Las Vegas. During the first several years, Karas added 30,000 dollars to his capital.  One day, he decided to test his luck in dice. At the Horseshoe casino, Archie scooped more than a million dollars. Archie’s gambling career took up, making him ridiculously rich. However, Karas’s success didn’t stop him from blowing away his fortune in the nick of an eye.

There were times when the now deceased Kerry Packer was Australia’s most affluent person. He gambled away 20 mln dollars in a London casino. However, that didn’t upset Packet at all, because earlier he had won 30 mln at the MGM casino.  Shortly before his death, Parker purchased the Crown casino network, becoming the head of a major gambling company.

In the mid-90s, an unknown old man, who called himself Barefoot Joe, entered a Las Vegas casino. The old man was poorly dressed and had no shoes on. However, the man had 400 dollars on him, and the security guards let him in. In a week, he left the casino with the fortune of 1.5 mln dollars. Shortly after his triumphant win, Barefoot Joe disappeared, after having sold the film rights to his incredible story for 10,000 dollars.

Ashley Revell, is, hands down, one of the most reckless players in the history of gambling. When a multimillionaire is making high bets, it’s one thing. However, when a common person puts his last money at stake, this is a totally different situation. Revell bet all his savings – 135,000 dollars – on a red sector at roulette and won.

Fouad al-Zayad, a Syrian businessman and investor, fell victim to his own gambling passion. He was a frequent visitor at major casinos, winning and losing huge sums of money all the time. One day, he blew away his entire fortune, and even sank into debt. To cover his debts, the court ordered to sell al-Zayad’s personal jet, luxury cars, and other property.

A man named Robert Maxwell is known for gambling away a whopping 2 mln dollars at a London casino. The player just couldn’t make himself stop at the right time, which resulted in devastating losses. By the way, after Maxwell’s death, it was established that he had earned his fortune illegally.

Phil Ivey is a poker legend. He is the embodiment of what a professional poker player should be.  Ivy has a spotless reputation. The 9 bracelets he won at the World Series of Poker are the best proof of his brilliant skills and remarkable talent.