"Week of Responsible Gambling" started in UK and Ireland 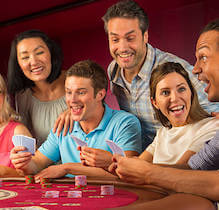 About 130,000 employees of more than 11,000 gambling sites and online sites in the UK and Ireland take part in the “Week of Responsible Gambling.” The task of the event is to convey customers, as well as their friends and families, what it means to play responsibly.

The campaign is actively supported by all major operators, and the hashtag # RGWeek18 has already collected over 2.3 million impressions 48 hours before the official launch of the campaign.

Leading football clubs supported the action. Last weekend in the television area of the Premier League club Crystal Palace, the movie # RGWeek18 was shown during the match with Arsenal.

Responsible Gaming Week is also supported by the Hippodrome Association and the British Horse Racing Association. Reports of responsible gambling will be shown at several meetings, including Ascot.

The campaign is led by the IGRG, which through its trade associations covers all sectors of the gambling industry: online segment, entertainment arcades, bingo clubs, bookmakers and casinos.

This year, Responsible Gaming Week, which runs from November 1 ‘till November 7, was firstly supported by Ireland. In the region, 800 bookmakers joined the campaign, as well as the Irish Entertainment Trade Association, Equestrian Racing Ireland, Dog Racing Ireland.

The campaign theme is “Let's talk about responsible gambling”. Among the events held during the week are scheduled trainings and consultations from GamCare in Birmingham, Bristol, London, Leeds and Halle.