There won't be any casino on Boracay island 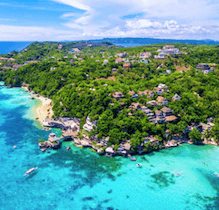 The report, citing a government spokesman published by the Philippine news agency, says that there will not be a new casino on the island of Boracay.

"President Rodrigo Duteret has already made a decision and announced that the construction of a casino on the island of Boracay is prohibited," Eduardo Año, an employee of the Department of Local and Internal Government, quotes. - People go to Boracay to swim, not to gamble. So there will not be a casino."

The head of state indicated his clear position on this issue. Roy Chimatu, the Minister of Environment and Natural Resources of the Philippines, confirmed that Boracay will open for tourists on October 26, after a six-month closure.

Information that the island will not have a casino, appeared before its temporary closure for tourism. In early April, the representative of President Harry Roke stated that there will not be a new gambling facility in Boracay.

At the same time, Roque added that he did not know that the local regulator, Philippine Amusement and Gaming Corp (Pagcor), granted a temporary license for gambling to the operator of the Macau Galaxy Entertainment Group.

According to the plans announced by the companies, an area of 23 hectares in Barangay Manoc-Manoc should have a $ 500 million gambling resort.

Recall: in April, the Philippine gambling regulator PAGCOR said that he did not know about the intentions of Macau Galaxy Entertainment Group to abandon plans to build a casino on the island of Boracay.