The number of tourists in Macau increased by 25% in January 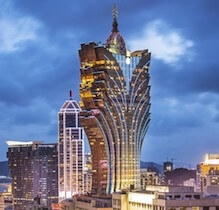 According to official data, in January, a special administrative region was visited by 3.43 million tourists. The index surpassed last year's by 24.9%.

The attendance information was published on the website of the Macao State Statistics and Census Service. According to the report, compared with December 2018, the figure fell by 4.1%.

Despite the fact that the influx of tourists is an indicator of the harmonious development of business, investment analysts point out that there is not always a direct correlation between the number of visitors and the income of gambling establishments.

According to statistics, in the past month, 1.78 million tourists visited Macau with a one-day visit, which is 48.8% more than a year earlier.

On average, visitors stay in Macau for one to two days. The number of people who stayed at least for one overnight stay increased by 10.7% (1.64 million tourists).

The number of visitors from mainland of China increased by 2.51 million, which is 29.9% more than a year earlier. Most arrived as part of special tourist groups. South Korean citizens added 1.6% (99,463 guests).

The opening of the Hong Kong-Zhuhai-Macau bridge helped simplify the route for travelers from Hong Kong and mainland China. In January, 443,908 tourists used the bridge to enter Macau. For comparison: the number of arrivals by sea decreased by 35.1%.

Local authorities are investing heavily in marketing campaigns designed to extend the stay of tourists in a special administrative area. This is due to the fact that a link has already been established between the length of stay and the flow of funds that affect the income of gambling establishments.