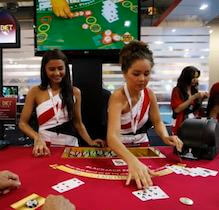 Macau may prohibit employees of casino operators from being on the game floors during off-hours.

This summer, the Macau Assembly of Legislation (AL) introduced new rules prohibiting casino staff from being on the game floors during off-hours, which effectively prevents them from playing gambling in the territory of Macau casinos. Then it was not mentioned that the ban would also affect the VIP staff.

On Tuesday, October 23, it was reported that employees of the VIP sector would also be included in the proposed Law No.10/2012, joining the croupier, slot machine operators and cashiers, as well as security guards, cleaners and sellers of food products and beverages.

The bill will be considered by the Macau AL on October 29.

It is reported that representatives of the gaming industry mainly support the proposal to include VIP staff in the list. Major operators are interested in protecting their employees from the excessive effects of gambling.

Surveys show that there are too many croupiers among the participants in local programs for the treatment of gambling addiction. Most of them reported significant debts and fear that scammers could use them to trick the casino.

There are also cases where the croupier resorted to theft at the workplace to pay off debts to the casino. Gambling operators are particularly concerned about such internal thefts, as for many years truly astronomical sums disappeared from VIP accounts.