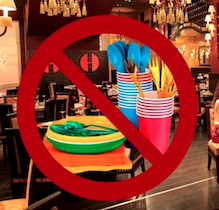 The operator of the MGM China Casino will stop using disposable plastic utensils in the restaurants of it's gambling establishments.

The innovation will come into force on January 1, 2019. The company plans to use alternative, less environmentally harmful dishes. It's about replacing not only kitchen utensils, but even such small things as straws for drinking.

"Plastic straws and other disposable plastic utensils have a detrimental effect on the environment and our next generation. With this innovation, we would like to draw the public's attention to the issue of pollution of nature with such materials," - commented MGO Chief Executive Officer Grant Bowie.

According to the company's calculations, this step will "relieve the nature" of at least 860,000 plastic tubes and 470,000 containers for collecting food annually.

The parent company MGM in the US - MGM Resorts International - in July this year also introduced a rule regarding the use of plastic in its establishments. So, drinking straws are now given to customers only on an individual request.