The floating casino of Goa will be land-based soon 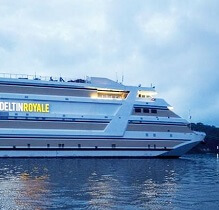 The casino on a riverboat in the Indian state of Goa is relocated to the ground. Over the implementation of plans, according to Union Gaming Securities Asia Ltd., Delta Corp Ltd. is actively working on this issue.

The company's financial report showed that net profit in the second quarter increased almost twice as compared to the same period last year.

"The growth potential of the company's profit and development as a whole consists of several main segments: gambling operations in casinos, online games and hospitality," Union Gaming representatives commented.

The company explained that the increase in profits was mainly due to "the movement of many players from neighboring small hotel casinos that are closed due to the recent increase in license fees."

According to Union Gaming analyst Grant Gowerzen, the only obstacle to the company's continued growth is the lack of space on river ships.

"Basically, the demand is growing, and Union Gaming continues to take measures to move the institution to land," Goverzen said.

Meanwhile, representatives of the National Human Rights Commission of India (NHRC) proposed to legalize online gambling and betting on the territory of the country.