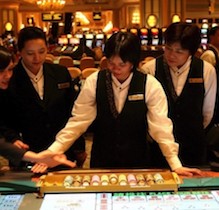 Analysts from the Sanford C. Bernstein brokerage company revised their ratings for both the Galaxy Entertainment Group and Sands China, based on current company ratings and forecasts for expanding their capabilities.

Analysts believe that, despite the decline in GGR growth, the overall picture for the Macau casino industry will remain positive.

“Galaxy improves operations for the mass market in Galaxy Macau and StarWorld, while maintaining leadership in the VIP segment. A key factor in developing business and increasing margins will be improving operational capabilities and business structures,” - experts say.

According to analysts, the reconstruction of Sands Cotai Central and modernization of Parisian will help to increase the income of Sands China in the premium mass market segment. The long-term growth outlook (starting from 2020) is associated with the expansion of hotel room capacity and restructuring.

Recall that, in accordance with the revised law, which entered into force on January 1, all smoking rooms in Macau casinos must be approved by the authorities and meet high technological standards.