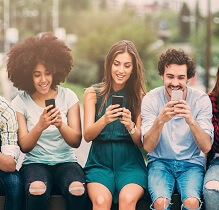 According to a study conducted by the Canadian Center for the Study of Addiction and Mental Health, every eighth minor resident of Canada visited the online casino to play poker or bingo at least once during the last quarter.

Representatives of the center conducted a survey, respondents of which were more than 10 thousand teenagers from the three provinces of Canada. 12% of respondents answered that they had recently visited social casinos using Facebook or other sites. Dr. Tara Elton-Marshall, the initiator of the study, said that in her opinion, in the foreseeable future, these guys will become potential customers of land-based and online casinos and may face the problem of gambling addiction.

The danger of free games also lies in the fact that in similar games for conditional money, winning combinations are much more common than in virtual casinos for real money. As a result, a teenager creates an illusory idea that you can earn money in an online casino with ease.

Recall that Starlight has opened a casino for millenials in Canada. According to Starlight general manager Kevin Booth, the long-term goal of the project is to attract people who have never played table games and make this process fun for them.

Suggested Reading - All casinos in Albania will be closed