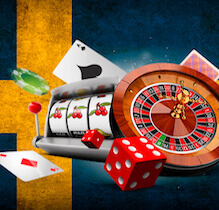 The Swedish gambling regulator continues to issue new licenses in anticipation of the launch of a liberalized online gambling market.

Lotteriinspektionen - Swedish gambling regulatory agency, which will soon be renamed to Spelinspektionen, announced that four more companies had been granted licenses for online gambling. The total number of new licensees reached 31 on the eve of the launch of the new liberalized market at January 1, 2019.

By legalizing the online gambling market, Sweden was motivated with the desire to protect consumers, by mitigating problematic gambling behavior. However, according to a new study, international operators that serve Swedish professional players without the permission of local authorities are already better at this task than domestic ones.

Researchers at Stockholm University conducted a survey among representatives of both foreign and Swedish gambling operators to determine how prepared they were for the requirements of a liberalized market to the standards of responsible gambling.

Ultimately, the researchers concluded that both on international websites and in Swedish companies "there is a lack of a critical point of view when discussing responsible gambling." Companies rely on the “informed choice of players”, considering that it is enough just to place the necessary information section regarding responsible gambling on your website.