Sega Sammy does not focus on Osaka, but on Tokyo 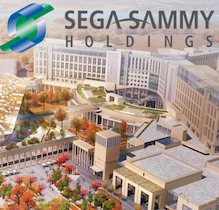 Hajime Satomi, chairman and CEO of Sega Sammy Holdings Inc., a Japanese entertainment conglomerate, slowed down interest in obtaining a license to build a casino resort in Osaka, openly demonstrating a potential preference for the Tokyo metropolitan area.

Satomi said that after Osaka becomes the venue for the 2025 World Exhibition, it is likely that this region will develop as a location for one of the integrated resorts. However, he added that some problems of the development of the infrastructure of the region remain topical.

“Since our company is based in Kanto, we intend to continue to monitor the situation and carefully consider whether we should actively participate in the development of the casino resort in Osaka,” - said the company's president. The Kanto region includes the Greater Tokyo area.

Responding to a question about possible partners and investments in a Japanese integrated resort, Satomi said: Sega Sammy was primarily interested in becoming the majority owner of any casino project in Japan.

“Presumably, the company will develop in the Tokyo area. It is possible that a large-scale project will be implemented on this territory. Now, it is difficult to say how much our share in total capital will be represented. However, I would like to receive a controlling stake,” - said Satomi.

Sega Sammy management last month reported that they were looking for the most suitable partner to apply for licensing a casino resort in Japan.

Earlier, company representatives have already mentioned that they are accumulating know-how in managing casino resorts through investments in the South Korean hotel Paradise City. In the November presentation, Sega Sammy reported that 84 of its employees are currently managing Paradise City, “including 57 gaining experience on the spot.”

“Regardless of what kind of operator will receive a license for comprehensive services, Japan will have to hire thousands or tens of thousands of people,” - the company’s management said.

Satomi added that Sega Sammy is developing a structure that will allow most qualified positions to be filled by Japanese staff.