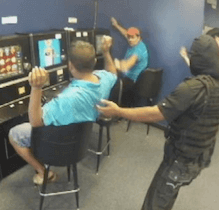 On November 15, a drunk citizen of Russia opened gunfire from a traumatic pistol at visitors of the casino in the city of Soligorsk. A man could not explain the reason for his action.

A Russian citizen temporarily living in Soligorsk, came to one of the gambling establishments of Belarus, taking with him a traumatic pistol. The man was very drunk and, in the morning, began a chaotic shooting. At 5:30 a group of detention arrived in a gambling establishment. They heard shouts from the building. Visitors and employees of the gambling club were on the floor, a man stood above them with a weapon in his hands. The intruder was instantly disarmed and detained. The incident went without injuries and currently under investigation.

A similar tragic outcome occurred on October 1st, 2017 in Las Vegas. Stephen Paddock, who was in the hotel of Mandalay Bay, opened fire from the window of his room on the 32nd floor at the visitors of the festival of country music, then committed suicide. As a result, 58 people died, another 500 were injured.

Suggested Reading - In Latvia, one of the gambling operators was refused to issue a gambling license after interviewing residents