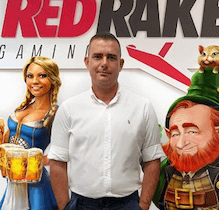 Red Rake Gaming, the leading content provider for online and mobile casinos, has complemented its management team by appointing Nick Barr, the former director of sales at Genii, as a head of the Maltese branch.

Barr joins Red Rake Gaming as the general manager of the Maltese branch, which since founding in 2016 has achieved significant results. He will be responsible for increasing the already significant presence of the company in the worlds gambling market.

The Red Rake Gaming has official licenses to operate in Spain and Italy, as well as several license applications. In the future, Red Rake plans to expand the global reach and meet customer needs, becoming the number one gambling entertainment supplier in new markets.

"In two years of activity, we have made significant progress. However, in our plans we want to expand and become a key supplier of the gambling entertainment on the market, and Nick is an ideal candidate to achieve this goal," - said Carlos Fernandez Aguilar, Business Development Director and co-founder of Red Rake Gaming.

In turn, Nick Barr said that he would gladly join a team of professionals of this level. He also noted that now is the most suitable time for this.