Poland will get more casinos in near future 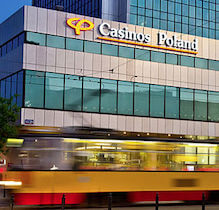 The Polish branch of the Century Casinos Inc (American gambling company) received the eighth license. As a result, new facilities will appear in a number of Polish cities: three casinos in Warsaw plus additional casino in each city listed below:
Wroclaw, Katowice, Bielsko-Biala, Krakow and Lodz.

The opening of the casino in Krakow was planned for June, while the third casino in Warsaw and the establishment in Lodz will open next month.

In addition, the company owns and operates gambling facilities in the United States, Canada, Britain and Vietnam, as well as casinos aboard cruise ships in which Century is interested.

Century Casinos also reported that the company has encountered obstacles in the Polish gambling market.

"We are extremely pleased that important tender for obtaining a license has come to an end and soon we will manage eight casinos in Poland. This casino market continues to evolve, and we look forward to the moment when we will get a significant profit," -said Peter Hayzman, co-executive director of the company.

The Australian division, controlled by Century Casinos, appeared in the front pages of the newspaper in April after acquiring a 51% share in the company with the right to run a small slot machine hall in the hotel of the Vietnamese province of Kaobang. Resorts Management GmbH received a controlling share in Golden Hospitality Ltd.

The Vietnamese administrative region is bordered by the Chinese provinces of Yunnan and Guangxi. Despite the fact that gambling is banned in mainland of China, few casinos on the northern border with Vietnam serve Chinese tourists.