Owner of the Landing International was arrested in airport 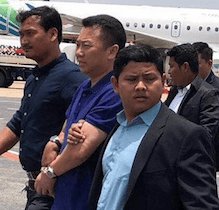 Chairman and owner of Landing International, Yang Zhihui, was arrested by the Cambodian authorities last week, after which he was deported to China.

This happened after the company informed the Hong Kong Stock Exchange that the operations are going on routinely, despite the fact that Zhihui stopped contacting before it became known about the arrest.

"He is suspected of bribery and organizing of a financial scam" - this message appeared with reference to the source of The Iniquirer.

It was accompanied by a photograph of a businessman handcuffed at the airport. His arrest can also be connected with suspicious business relations with the Huarong Asset Management Co. Ltd. Chinese company, which is often at the center of numerous scandals.

Moreover, the local official also said that the company's plan to create an integrated resort worth €1.3 billion in the Entertainment City complex in Paranac is now under threat, since after the arrest of Zhihui, the authorities of the Philippines will impose a ban on construction.

In connection with this situation, the company's shares fell by 35% on the Hong Kong Stock Exchange before the trades on it were suspended.