Netherlands regulator stepped up in the fight against illegal gambling operators 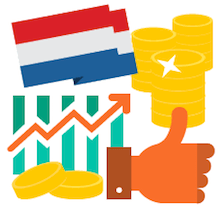 On Friday, gambling regulator Kansspelautoriteit (KSA) announced the imposition of a fine of €350,000 on CyberRock Entertainment NV, an operator based in Curaçao, and on Cyprus-based company Honeydew Trading Ltd.

As an example of violations, KSA presented seven gambling sites operated by the aforementioned companies: Play2wincasino.com, Supremeplay.com, Casinofiz.com, Eurofortunegames.com, Rockbet.com, Vanguardscasino.com and Vegasdays.com. The regulator claims that these websites can be considered “Dutch” because of the use of language options and the iDeal interactive payment system.

In recent years, KSA has aggressively punished many other sites for such violations and has recently stepped up its efforts to enforce the law. The Netherlands is in the process of liberalizing online gambling market, and high-ranking government officials have suggested that penalized operators may have to endure a certain time out before they can again apply for a new Dutch license.

The local senate has not yet approved a bill on online games in the country, and potential licensees will have to wait longer than expected. Consideration of the bill on the size of the tax rate of 29% showed that the new rules for online licensing in the Netherlands are unlikely to come into force before July 2020.

The government is in no hurry to finalize the legislation on online gambling in the country, given the recent survey EenVandaag, which was attended by more than 21 thousand Dutch. Survey showed that only 34% of respondents support the new rules, while 43% are against, and 23% are undecided.