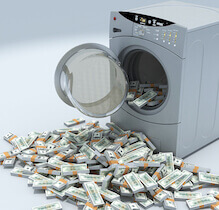 New measures to combat money laundering are introduced into the casino industry in British Columbia in the first half of 2018.

Measures to combat money-laundering have damaged the casino segment in British Columbia. Revenues at River Rock and Parq gambling establishments decreased in the first half of the year, and the companies behind them blamed the introduction of new rules for combating money laundering. These rules require the casino to fully provide information on the sources of cash deposits or bonds which client makes bets with sum more than $7,500.

According to a report by Great Canadian Gaming, which manages River Rock Casino in Richmond, revenue fell significantly in the first six months, mainly due to a reduction in customers' bets at gambling tables. Meanwhile, the revenues of the Parq casino in Vancouver also declined.

However, David Ebi General Attorney explained that these measures were effective, since suspicious transactions fell from $13.2 million (2015) to $132,000 in March of this year.

"Of course, from the very beginning we understood that the adoption of such measures will lead to some financial consequences for the casinos," - he said. - We expect that to support the strategy to fight against crime and prevent money laundering, all gambling operators should be prepared to lose some of the high-stakes customers. But this is an action that we had to take."