Macau opens the casino doors after the Mangkhut typhoon 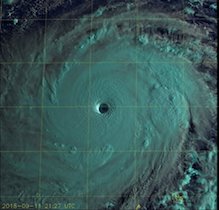 The government of Macau has given the order to open all gambling establishments in the territory of the district. From 4 am on 17 September they will start work again.

The local administration instructed to close all gambling centers on Saturday, September 15, in order to protect casino employees, as well as guests and residents of Macau. There have been no similar situations since 2002.

As a result of the cataclysm that hit the Philippines and the southern part of the Republic of China, more than 150 flights from Macao were canceled. In the country of seven thousand islands, at least 64 people were killed due to typhoon.

Nevertheless, according to Union Gaming, the overall level of damage after Mangkhut is much less than last year's Hato.

In the old areas of Macao there were floods, almost all leading casinos survived the last storm easier than last year.

As a result of the closure of gambling facilities, the gambling industry of Macau will suffer losses of about 1,1-1,5 billion - hence, GGR will also fall from the expected 14.7% to 7.7-9.3%.

Recall that the day before, on September 14, the Macau regulators gathered at a round table to discuss possible security measures in case of cataclysms.