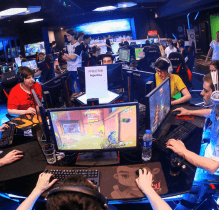 Caesars Entertainment Corp. working on the creation of an innovation platform to attract the generation of millennials. The Fan Cave has already been tested in Las Vegas.

A total of 44,000 square feet (about 4,000 m2) at the LINQ hotel was converted into the so-called “casino of the future”. Upon completion of the construction process, which is scheduled for the second quarter of 2019, this platform will become the largest innovation zone in the gambling market.

Executive Vice President of Games and Interactive Entertainment Christian Stewart commented on the work of the area in the LINQ:

“This project is very similar to the laboratory, where different tools and mechanisms for attracting visitors are used to create more comfortable conditions for customers. When the site plan is approved, we scale it to other company’s facilities.”

The LINQ Experimental Zones are designed as caves with VR games as well as digital board games. It also uses digital panels and LED screens. The creators of these areas pay attention to the social aspect, as well as the mobility of games.

Tournaments based on slot machines and sports betting will be held on a regular basis at Fan Cave. The vice president of the campaign expects this to increase the availability of gambling innovation.

In October, The LINQ launched a total of 12 Fan Caves. Each of them can accommodate 10 players. The rental deposit ranges from $100 to $1500 and can also be spent on food or drinks. The cost of entertainment depends on the type of event and increases during large-scale events such as the Super Bowl. Profit of the Fan Caves already doubled the average income received from the betting hall, which was in this area earlier.

In the premises of Fan Cave, a 98-inch TV is installed, which can be divided into four screens to view various events. For entertainment, Xbox games and VR headsets were provided.

Suggested Reading - Casino Canberra will be bought for $ 22.6 million