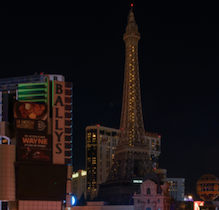 The gambling establishments of Las Vegas on the evening of October 1 turned all lights off in memory of the victims of the terrorist attack in Mandalay Bay.

At 22:01 local time, the casino lights began to turn off, including the “Welcome to fabulous Las Vegas” sign. Guests who were in establishments at this time could see on the building screens an image of the boulevard with the hashtag #VegasStronger.

The memorial event took place in one of the city parks with the participation of Mayor Carolyn Goodman. A memorial was opened in the park, 58 trees were planted and 58 candles were lit in memory of the victims.

Details of the attack

On October 1, 2017 at 10:01 pm, Stephen Paddock, who was in the hotel of Mandalay Bay, began to shoot people with SMG weapons from the window of the 32nd floor during the country music festival. As a result of the terrorist attack, 58 people died, another 500 were injured. After committing the crime, Paddock committed suicide.