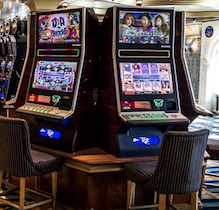 According to representatives of the Korean Stock Exchange the casino profit of the Paradise Co Ltd South Korean operator decreased by 2% per annum in August compared to a decline of 8% in the same month of the previous year.

If we compare with the results of the previous month, the casino-profit decreased by 17.4%.

The profit from slot machines in August fell by 13.3% per annum — to 3.50 billion South Korean won. In the previous year, the level of annual profit growth for this segment was 65.5%.

During the first 8 months of 2018, gambling profit increased by 19.7% and totaled 410 billion South Korean won, compared with 342.54 billion of South Korean won over the same period last year.

The summary table and profit from slot machines from January to August remained at a high level, increasing their performance by 19.9% and 16.7%, respectively.

These figures show the results of four casinos for foreigners: Walkerhill in Seoul, Jeju Grand on Jeju Island, Busan Casino in Busan and Paradise City in Incheon.

The company Paradise Co has reduced the annual decline in total gambling profits, which was observed in August 2017. According to investment analysts, the decline was partly related to the decrease in the number of tourists from China due to disagreements between the countries about the deployment of the American missile defense system.

China suspended group tours to South Korea last March in protest against the decision of the South Korean authorities to deploy a missile defense system on its territory, taking into account the close location from China.

According to the Korean Tourism Organization, the total number of visitors from China increased by 1.8% in the first seven months of this year.

In May, revenues of Paradise Co increased by 25% compared to the same period last year.