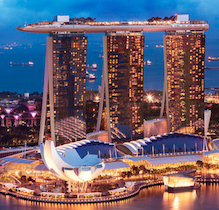 According to the annual report of the Singapore Casino Regulatory Authority (CRA) for the 2017 fiscal year, the total number of fines for two operators of local casino resorts decreased by 63.6% per annum.

Marina Bay Sands Pte Ltd was fined with 5,000 Singapore dollars for admitting one permanent resident and permission to stay in a gambling establishment without paying an entrance fee.

The Resorts World at Sentosa Pte Ltd received a fine in the amount of 55,000 Singapore dollars for admitting three teenagers and one person deprived of the right to enter the casinos.

Former executive director of the regulatory body, Jerry Xi, noted that the harmonized work of the CRA, the National Gambling Council, the Singapore Police and other law enforcement organizations contributed to a reduction in the number of casino-related crimes.

Xi also stressed that the development of digital technology is a potential threat to regulators.

“New platforms for casino games, such as virtual reality and mobile gaming, radically change the situation with gambling in different jurisdictions. We introduced a system of gaming equipment (GAMES) to more effectively manage information about gaming equipment and machines,” - the former CEO added.

CRA Chairman Tan Ti Ho, in turn, said that in 2017, problematic gambling and casino-related crimes were under control.

In late August, it was reported that the number of visitors to Singapore in the first 6 months of 2018 increased by almost 8%.