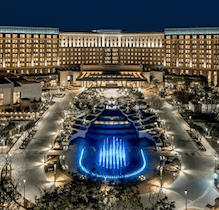 The Greek gambling regulator launches a tender process for operators interested in obtaining a casino license in the Hellinikon entertainment resort.

The application process for the construction of a casino as part of a larger integrated resort, located on the site of the former Ellinikon International Airport near Athens, began after a long delay. The granting of casino concessions is an important step for the development of the entire complex.

The Greek Gambling Commission announced on Friday, February 22, that a request for tenders was published in the Official Journal of the European Union, in which interested operators are invited to submit their applications for gambling licenses. The winner of the competition will receive a 30-year concession to manage casinos in the Hellinikon entertainment resort worth €8 billion.

Interested operators will be able to submit their applications for a casino license until 11am local time on April 22, 2019. In other words, organizations that are interested in managing a gambling platform in the territory now have two months to submit an application and receive the corresponding right. When the winner will be announced, is still unknown. The Greek Gaming Commission stated that the tender will be received by the company that will submit the most cost-effective offer based on the best price-quality ratio.

Conditions for obtaining a tender

Under the terms of the 30-year concession, the preferred casino operator will have to create a resort with gambling facilities, a hotel, a conference center and a number of other facilities, as well as invest in real estate at least €1 billion.

The Greek Gambling Commission stated that candidates must meet the following requirements:

Conditions for obtaining a tender

The Greek company Lamda Development was chosen as the preferred developer of the larger Hellinikon resort and an international consortium of investors, including the Fosun Group, Eagle Hills Abu Dhabi and Latsis Group Chinese conglomerate, who joined forces to lead the casino resorts.

Among other things, Hellinikon will also include residential areas, hotels, shopping centers, a variety of restaurants and bars, museums and cultural centers, family entertainment, sports and leisure facilities and much more.

It is expected that during the construction phase more than 10,000 jobs will be created, and after putting the object into operation at the resort more than 75,000 people will work. It is planned to attract at least one million foreign visitors.