History and perspectives of gambling on mobile devices 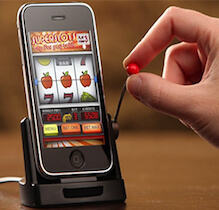 It's no secret, that nowadays everyone "move" to mobile gadgets. Developers make a lot of effort to allow people to spend their time with favorite game during a break at work, when traveling and so on. This approach is beneficial to both parties: gambling sites earn money and expand their audience, and players satisfy their thirst for excitement.

Recalling the story, one can conclude that access to the Internet with mobile phones was received relatively recently. So, just thirty years ago we got 1G networks, through which data was transferred. The real boom in the mobile device market occurred with the advent of 2G technology. Already at this stage, the developers assumed that mobile devices will be used as gaming platforms. A real breakthrough in the gaming industry was observed right after the appearance of smartphones on the market. Not many people know that the first iPhone came off the assembly line just eleven years ago, followed by a competition with dozens of famous brands that in a relatively short period of time were able to popularize their products around the world.

In fact, the main competitor for the iOS today is Android technology, which Google introduced just a year after the iPhone. Since then, the mobile market has surpassed all expectations, largely due to the spread of 4G networks. Hundreds of game sites allow users to choose thousands of varieties of gambling games, and mobile Internet allows you to access them 24 hours a day. And as for today graphics and gameplay of mobile applications are able to surprise even the experienced gambler, you can only imagine what developments are waiting for us ahead.

The spread and popularization of mobile gambling began when social networks entered our everyday life. Only Facebook now has about 2/6 of the world's population registered. Accordingly, the advertising of any online casino on the expanses of the Facebook site certainly gives a positive result. As a bait, as a rule, a line of free games is offered. Naturally, such a policy of gaming companies is designed solely to attract customers.

The most popular games for users of mobile gadgets are poker, roulette and blackjack. Visitors to virtual casinos have the opportunity to play not only with a AI, but also with real people, taking full participation in tournaments. Monthly hundreds of new games are developed, increasing casino games collections and surprising players with more advanced graphics and gameplay. Another breakthrough in the gaming industry happened due to the opportunity to conduct a game with a live dealer in real time. According to the statistics, the profit of the worlds capital of gambling, which by right is considered to be Las Vegas, has declined by several billion dollars a year over the past two years. If this indicator grows, the concept of "giving" gambling games to the clients of the casinos will have to be changed.