The number of addicted gamblers in Macau increased by 11.3% 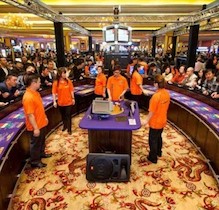 According to the results of 2017, the number of players registered in the Central System for Registration of Persons with gambling addiction was 157, which is 11.3% more than in 2016.

This is reported in the latest annual report of the Macao Social Security Bureau on the issue of gambling.

The report showed that more than 80% of people wishing to receive state aid in 2017 are residents of Macau. About 90% of registered players with gambling addiction are employed. Of these, more than 10% work as a dealer in the city's casino.

Representatives of the Bureau said that the proposal of the Macau gambling regulator to amend existing legislation in order to prohibit casino employees in Macau from playing gambling games during non-working hours could reduce the risk of gambling addiction among workers. An amendment to the existing legislation should be submitted to the Legislative Assembly of the city.

The Bureau was also informed that most of the people who applied for help in 2017 were between the ages of 40 and 49. In addition, according to the report, about 70% of players with gambling problem had debts, and among those who are in arrears, more than 30% indicated that their debts amounted to 50 thousand patacas ($ 30,939) or more.

In addition, according to the results of 2017, about 28% of violations of the ban on smoking were also registered in gambling areas in Macau.

The Macau government uses a central system to collect statistical information about players with gambling problem who seek help to understand their habits and behavior with regard to gambling.