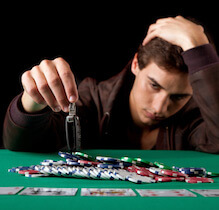 In the city of Leeds, Northern England, a clinic for gamblers will begin its work - the only institution of its kind outside London.

The official opening is scheduled for 2019. The facility is funded by the charity organization GambleAware, which allocates an annual grant of £1.2 million.

“We have been striving for this for so long, because today, treatment for addiction can only be obtained in southern London. The problem itself will not disappear, but many will receive so much-needed help,” - said Ann Evans from Doncaster.

Evans son committed suicide in 2010, after his addiction to gambling led to the complete ruin of his family.

The National Clinic for Gambling Dependents will be managed by the Leeds and York Partnership NHS Foundation Trust and GamCare.

Matt Gaskell, a consultant psychologist at the NHS Trust, said that gamers often need help with a number of problems. The specialist cited the example of rupture of relations, debts, loss of work, etc., as a result of which addiction will lead to crimes or even suicide.

Earlier it was reported that Tracy Crouch left the post of Minister of Sport due to the delay in reducing rates for FOBT terminals.