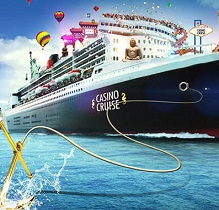 The operator of casino-ships and investor in Asian casinos - Genting Hong Kong Ltd announced that it expects a decrease in net losses in the first half of this year from $ 205 million to $ 150- $ 170 million.

Genting Hong Kong, a branch of the Malaysian conglomerate Genting Bhd, informed the Hong Kong Stock Exchange that the company's performance was mainly influenced by the improvement of its cruise business. It was partly offset by a decrease in the value of capitalization of assets.

Genting Hong Kong is preparing to lay the keel of 20,000-tonne Crystal Endeavor next month, and in September the keel of the first of the 204,000-ton Global Class ships will be laid. Both events will increase capitalization and increase production rates.

The latest forecast is approved by the rules of the stock exchange, but it does not take into account the results of activity in the first half of the year of the key company - Travellers International Hotel Group Inc, which runs the Resorts World Manila in the Philippines. The commission said that it was going to make another statement after the announcement of the results of Travellers International in the first six months.

Last year, net losses of Genting Hong Kong amounted to $ 242.3 million, and in 2016 - $ 502.3 million. The losses were partly due to one-time revenue of $ 205 million from the sale of shares of Norvegian Cruise Line Holdings Ltd, as well as shares of the Australian casino operator The Star Entertainment Group Ltd.

The share capital of Genting Hong Kong is now traded only on the Hong Kong Stock Exchange. In April, the company's shares were excluded from the list of the Singapore Stock Exchange. On the eve of this event, representatives of the organization said that an exemption from the list would give the company the opportunity to focus on the main direction of its activities - cruise ships in Asia.

Genting Hong Kong is preparing to announce unverified consolidated results for the first half of next month.