Casino-profit of Atlantic City in August was $ 304 million 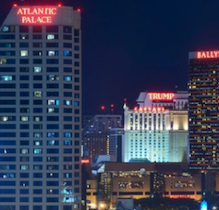 Casino operators in Atlantic City reported that the total gambling profit for August increased by almost a quarter due to new verticals and objects.

According to the New Jersey Gambling Regulation Department, in August the total gambling profit reached $303.9 million, which is 24.1% more compared to the same month last year and $30 million more than it was received in July.

Even without $9.2 million from new sports betting licensees and $24.8 million from online gambling licensees, the August profit from land facilities still amounted to about $270 million, which is 20.7% more than in August 2017.

Despite the positive figures, most of the Atlantic City's casinos in August was in the red. Bally's revenues decreased by 10.7% to $18.7 million. The best result was in the Golden Nugget, numbers rose by 2.9%, $20.5 million. The leader again was Borgata casino-hotel, whose profit reached almost $70.9 million (+70%).

The basis for positive results was the receipt of Hard Rock Atlantic City ($30.8 million) and Ocean Resort Casino ($19.6 million).

However, in September, the profit of the Borgata facility could be seriously affected, since on September 1 the casino issued a progressive jackpot of $2.5 million to a woman named Hawthorne.

At the beginning of the year, Golden Nugget Atlantic City was informed of a partnership with Ezugi NJ and the launch of a live casino.