A major fire occurred in a gambling establishment in Cambodia 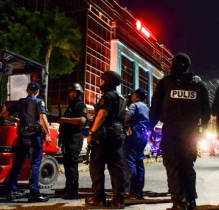 In the popular Genting Crown casino in Poipet, Cambodia fire broke out. As a result, several people were injured.

According to preliminary data, the cause of ignition were due problems with electricity in the elevator. As a result, the fire engulfed the 18-storey building that houses the casino. The fire occurred on the fourth floor, and then spread to the 13th. Ten fire engines, three of which belonged to the casino, were used to extinguish the raging elements.

According to the provincial police chief, Major General Ath Khem, there are no fatal casualties in the fire. However, six people were blocked in the elevator and received lung damage associated with smoke. Among the victims were five Cambodians and one citizen of China. All sent to a local hospital for further treatment.

Poipet is the main crossing point and transport interchange for travelers from Bangkok to Siem Reap. Due to the proximity to the Thai border, many gambling establishments are concentrated in the city. In Thailand, gambling is banned, and the local police recently closed another illegal casino, for this reason many Thai players visit gambling establishments in Cambodia.

The owner of the gambling facility, according to information provided by the Hong Kong Stock Exchange, is Amax International Holdings Ltd - the former operator of the Greek casino Mythology in Macau. According to media reports, in the Genting Crown Casino, where the fire took place, they planned to equip a VIP-room. Real estate is not related to Genting Bhd and Crown Resorts Ltd.