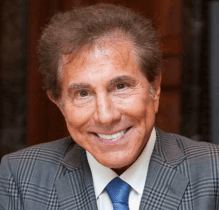 Among the entrepreneurs of America who have connected life with the sphere of tourism, entertainment and gambling, one of the most prominent figures is Steve Wynn. The businessman has a key role in the revival of the Strip in Las Vegas, as well as the development of the gambling zone of Atlantic City. The company Wynn Resorts inc., Opened by an entrepreneur in 2002, ranks 4th among US casino operators, generating an annual profit of over $6 billion.

The first object of the corporation was opened in 2005. It was a Wynn Las Vegas Resort & Country Club casino. The casino hotel was raised on the site of the Desert Inn complex while preserving historically significant parts and a golf course. Wynn Resorts paid special attention to the gambling zone. A large-scale gambling club with a rich selection of card casino games, video slots and other entertainment quickly occupied a decent competitive niche in Las Vegas. The next project of the company was in Macau. Opening took place in 2006. Wynn and his colleagues quickly found themselves in the context of the growing popularity of the gambling resorts of Macau, hurrying to open gambling establishment there. Four years later, another Wynn Resort gambling club was opened in Macau, and in 2008, the Encore Hotel and Casino opened in Las Vegas. Like the rest of the players in this segment of the entertainment market, the corporation does not even think about stopping at this mark, working on a constant expansion. At the moment of 2019 they are aiming at the Japanese market.

Along with two huge casino hotels on the Strip in Las Vegas, the company owns the large-scale complex - Boston Harbor in Massachusetts (US). In Macau, Wynn holding owns 3 different casinos. Wynn Resorts gambling establishments have certain distinctive features. Each of the gambling houses is located on the basis of large luxury hotel complexes. With this feature, each visitor has the opportunity to diversify the pastime, referring to the services included in the infrastructure of the hotel. This may be shopping, visiting the spa complexes, sports halls, numerous restaurants and cafes.

In each of the gambling establishments opened by the Steve Wynn corporation, the needs of all categories of the players without exception are carefully taken into account. Most casinos in Las Vegas have the following games in stock:

Regardless of location, Wynn Resorts gambling houses are characterized by an impeccable level of service. Prices can hardly be called democratic, but the status of establishments of this class does not imply economical prices, it's mostly for the VIP's.