Mystical side of gambling 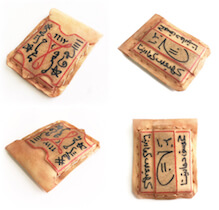 Do you know how gambling was born? History begins with the most ancient times and the most senior representative - dice.

Very popular were also the card games that originated in India. Initially, there were 8 suits, and the deck included 96 cards. In its essence, this entertainment looked more like chess than any card game.

Many mentions of gambling entertainments are present in folk tales and legends of different cultures. Gambling fun has long engulfed our world, but the origin of some of them is covered with a mystical halo. In truth, these stories are ominous, but at the same time very interesting for an inquisitive person.

As already mentioned, for the first time playing cards appeared in India and after that, they began to spread all over the world. The first games did not look like traditional and familiar to us entertainment, but gradually they changed, acquiring a more traditional form.

Today, the casino offers you to try your luck playing in baccarat or poker. But few people know that these games have a dark past - a frightening and incomprehensible. A lot of riddles around roulette as well, whose story - a symbiosis of mysticism and superstition.

Baccarat is considered a rather prestigious game, which is an elitist way to spend leisure time. Its rules are the most simple to master and do not present difficulties for the beginner. It seems that Baccarat originate in the XVIII or XIX centuries, but the real story is not so exquisite and positive as the game itself.

In fact, the similarity of baccarat is first mentioned around 900 BC. The ancient Etruscans had a rite of worship to the nine gods, with the help of which they decided the fate of innocent girls. The unlucky one had to throw a cube (cube was made of animal bones) of 9 faces, and the appeared number determined the outcome of the ritual. If there were number 8 and 9, the supreme patrons would declared her as a priestess. When a cube of the animal's bone showed 6 or 7, the girl was expelled from the community with disgrace, leaving to the mercy of fate. But if the figure was less than 6, the final was tragic - in this case the girl was sentenced to death.

The approximate probability that the martyr will escape death was 45%. How do you like this form of baccarat? It is unlikely that there will be a madman who will risk to play such game.