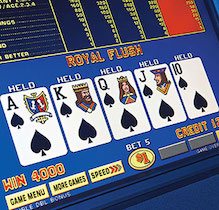 Royal Flush is, hands down, the most sought-after hand in video poker. It consists of five highest-paying cards, from 10 to Ace. A lucrative hand like that is a dream of any gambler. The sad thing is that a Royal Flush is a very rare hand and your chances of getting one are slim, to say the least.

Although your chances of collecting a Royal Flush are little to none, you can still estimate them. Before we do that, let’s introduce a term called a “Royal Flush cycle”. The cycle shows how many hands you’re dealt before you get a Royal Flush. The important thing to understand that a cycle is an average value. If the calculations say that one Royal Flush occurs once in 40,000 hands, it doesn’t mean that it will necessarily happen exactly on your 40,000 bet. In fact, two Royal Flushes may follow one after another. Although rare, a scenario like that is not impossible.

The cycle doesn’t say when exactly cards will form the coveted hand. Although purely theoretical, this indicator is a good illustration of how you may spend months or even years playing video poker and still not getting a Royal Flush.

Here are the cycles for the most popular video poker variations:

The fewer hands the cycle has, the higher are your chances to end up with a Royal Flush. In this regard, the classic Jacks or Better variation offers the best chances of getting the highest-paying hand.

Winning Odds In The 1st Cycle

As already mentioned, a Royal Flush cycle is theoretical value that only applies to an endlessly large number of hands. To tell the truth, even 40,000 hands is not that big of a number. To illustrate that fact, we played Jacks or Better on 1,000 slot machines. Each slot dealt 40,000 hands. The results were as follows:

The results turned out to be quite interesting. The probability that none of the 40,000 hands will contain a Royal Flush is almost 37%! At the same time, 63% of the slots generated at least one highest-paying hand. As you can see, getting the so-much-coveted hand is possible. But you shouldn’t expect that to happen fast. You have to be patient and prepare to play long hours before you finally hit the desired combination of cards.

In continuation of our experiment, we played 10 successive cycles on each of 10 slots. Our goal was to find out the odds of failing to collect a Royal Flush. As it turned out, things are not that bad! Your chances of getting a Royal Flush after only two full cycles is as high as 88.5%. Here are the odds of not getting the highest-paying hand in each cycle:

As you can see, after the 8th cycle, the probability of never seeing a Royal Flush becomes almost non-existent. Playing one cycle may not be enough to get the most valuable hand. You’ll probably need to complete 2 cycles before you achieve your goal. But the good news is that you’re sure to collect other profitable hands along the way!